Small towns have a way of keeping you longer than you’d ever expect. You grow up in them dreaming of the day you’ll leave, and wake up from the dream as a thirty year old, wondering what happened to all of those years.

Long Walk to Valhalla is the debut graphic novel of both Adam Smith and Matthew Fox, a book that focuses on one man’s attempted escape from his past, and the realization that it’s the past that makes you who you are.

Rory is on the cusp of a new life, a better life, when his car breaks down on a rural highway in Arkansas, just a few miles from where he grew up. He’s rescued by a Valkyrie named Sylvia, who is by all appearances a ten-year-old girl but claims eons of age and wisdom, and charmingly refers to our hero as “dumb butt”. Sylvia then takes Rory on a trip through his past, his sins and victories, small and grand, that make up the man he is, the one who is on the road to freedom from his past. Rory must face the truth about his special brother and his drunken father, and ultimately, about himself. It’s a trip that makes the reader look inward, at the kindnesses that were given and received. 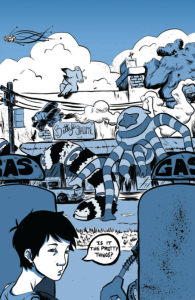 This is a fantastic first foray into the graphic world. Adam Smith fills the characters with feeling, bringing a familiarity to them despite the obvious grounding in their locale. Rory has the same doubts and regrets as most people, and Smith plays those into the larger part of the story, with the key regrets being things that the majority of readers can connect with in some way. Rory feels like he’s let people down, that he hasn’t lived up to his potential, that he has done exactly the wrong thing at every crucial point. And there are moments, as you read through it, where you can see his missteps. It is life seen through a singular scope, and Smith does a fantastic job of bringing his story to the reader.

Also making his debut in this book is Matthew Fox, who takes Smith’s words and translates them beautifully into the graphic format. Monochromatically colored, the characters have a cartoony style…no…check that. As soon as you start to feel it’s a cartoon style, he hits you with a panel that feel so much “Not cartoony” that it changes the way you feel about the style on the whole. Suffice to say that Fox takes the sometimes super-serious nature of the tale and makes it heartbreakingly real. There are imaginative portions, from the p.o.v. of Rory’s brother, that are wonderful and that Fox is able to twist into greatly creepy with just a few changes.

Long Walk to Valhalla is proof that you don’t have to have a pedigree or long-standing career to make great comics. Smith and Fox have jumped onto the scene with an endearing story, one that will have you looking to your own past and wondering how you can make your future just a little bit better.