Oy. This one is a hot potato for sure. Where to start with this review? I guess I will mention that I had already read a pretty scathing review that focused heavily on the racial tropes present in the story, and the title that can be construed as insensitive. This article also called into play white privilege as well due to the ethnicity of the creators. It was a well-written and cogent argument for the troublesome aspects of Strange Fruit #1. I liked the article and agreed with the argument. The trouble was I hadn’t read the comic yet, and didn’t really want to purchase something that may be racially troublesome, just out of curiosity.

So I decided to read it for free and do a review. This is also to challenge myself to put into my own words the nature of this book. It’s… well, it’s problematic. At least in some regards. Now, I am about as qualified to write without bias on the subject of white privilege as Waid and Jones are qualified to write about racism in the south without bias. So I feel like I purposely set myself up with a sticky wicket.

So, as a comic, purely ignoring the racial and social undertones, I think it succeeds. It’s a first issue out of 4, and I really have little idea where it will go from here, but it’s like any other successful #1. It sets things up, leaves us on a cliffhanger, and hopefully teases enough of the story for us to come back again and again. And then a fourth time since it’s a 4-issue mini. I’m not sure I personally want to proceed from here, and if I do it’s more out of curiosity revolving around the racial tension stuff rather than wanting to see the story unfold. 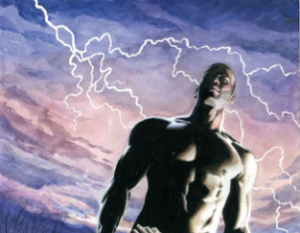 The art is really nice to look at. Watercolor paintings, with lots of detail. Fairly interesting poses and settings and framing. It’s not a comic that slouches in any means. The painted figures to me sometimes look too stiff and frozen to portray the movement and life and vitality that most pen and ink comics can. But that is more a nature of the chosen medium rather than a complaint against Jones. The facial expressions and action are actually well done, it’s just to me the picture looks more frozen in time than standard comic art. It’s less abstract than a cartoon, and closer to photography.

The writing didn’t blow me away frankly. It seemed to hit all its marks, and set things up properly, but nothing about it seemed particularly gripping right out of the gate. Really the most drama available between the covers so far is that which surrounds the acts of racism. But this isn’t strictly a book about racism. It involves an extra terrestrial. One that seems to be superhuman. It’s kind of like “What if Superman was black, and landed as an adult in the racist south of the US?” That, as a premise doesn’t really interest me much at all. If it does you, than maybe this book is right for you. So the superhero flavor doesn’t interest me personally, and the racism just generally leaves a bad taste in my mouth. As it should.

I’m not saying that this is a topic that is off limits. I’m not even saying it’s off limits for white creators to try and tackle. I’m just saying that I think that some of the actual storytelling devices are a little too close to some racist tropes for my comfort. I also think that mixing the racist south with something like super heroes kind of devalues the struggle that the slaves went through. I think I would feel just as icky reading a comic about a superhero in a Nazi concentration camp, written and drawn with this much realism. To me it feels like, those were real people, you know? And when you take their struggles and make them “fantastic” by adding things like superheroes or aliens, you are downplaying the real drama that is present. You are turning it into a setting to tell some OTHER kind of story, and that feels like undermining to me.

I could go on for a while about this, but I’m not sure it would serve to make my point any better. I feel like this is a technically well-executed comic by some industry pros that know what they are doing. I just wish I knew why they are doing it. It feels misguided. One last note on the title. If you are not familiar yet with what that is referring to, then google it. It’ll color your perception of this concept, and what the motivation and reasoning behind it was.