Story and Art by Kentarou Itani

Summary: Takuan is your average, everyday boy who desperately just wants to live an average, everyday life. To the point of which he will lecture often to one of his few friends about the importance of simple minded peace in simple minded things. That’s not a bad philosophy to live up to, but a philosophy the cosmos don’t seem to be willing to allow him to live. One day when Takuan meets Batsu, King Enma’s only daughter, his life begins to become much more entertaining…

[MAJOR SPOILERS from this point on…]

Review: I really enjoyed chapter 1. And I also really enjoyed chapter 2. We’re off to a grand start for sure. While last time was more of an introductory tale as well as just a dang fun mystery adventure this time around Itani chooses to clarify a bit of the lore that was lost in chapter 1 and help the reader understand what’s going on a bit better. As well as we get a fun and juvenile adventure of panty snatching tag. These Shonen Jump series are geared toward teenage boys after all.

What I like best about this series is definitely the characters. The back and forth between Takuan and Batsu is so infectious that you can’t help but see them as having been friends for a very long time though it’s only been a few days at best. The opening spectacle of Takuan being forced to do “Batsu-ups” as she calls them is hilarious.

It features Takuan doing push-ups while his face is situated over a group of spikes protruding from the ground while Batsu sits on his back. As this bizarrely funny training regimen continues Batsu spells out exactly why she’s hear on Earth in a bit more clarification than we got last chapter with some helpful doodles she places on Takuan’s stomach. 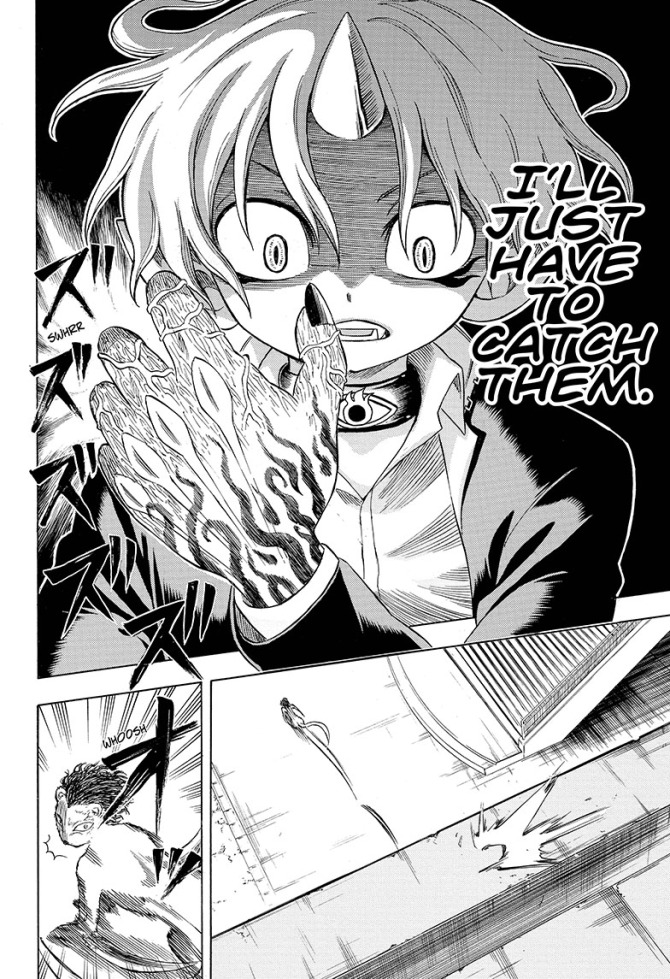 Thanks to King Enma’s death balance has escaped hell and instead of being able to keep the demons sealed in many of them have escaped to Earth and now Batsu is on a mission to capture them. Yes, some of this was captured in – for me anyways – an easy way to understand. But I appreciate the author for going back and making absolutely sure everyone is on the same page early on.

It’s not all just rehashing of information though, thanks to these doodles we get two very big revelations this chapter as to the history behind Enma’s death as well as an added depth to why Batsu is on Earth not just for the capturing of escaped demons. It’s layed on us early on that Enma was specifically murdered so it’s easy to understand that Batsu wants to find his killer most likely.

Later on in the chapter though it’s also revealed that it was a human that killed Enma which is huge because Enma is a big time otherworldly figure. He doesn’t exist in our plan of existence so how did a human get there in to kill him? It’s possible the human died, and killed him before being sent to hell however that it would have been a human soul and not a physical human that did the deed.

Unless it was the soul that escaped back to Earth what’s implied in this chapter that it was a flesh and blood human that committed the act. I am very intrigued to learn of the the human’s origins if DDD does indeed publish beyond its initial 3 chapters. Which I very much hope it does.

The vast majority of the second half of the chapter however is Batsu and Takuan attempting to catch a demon that is running around snatching panties from girls around Takuan’s school. It also grabs Batsu’s underwear which answers the question of whether she even wears them or not. It’s juvenile, yes, but I haven’t grown out of enjoying them either. It’s fun and all you see is underwear here and there so what’s the harm?

Batsu also eggs Takuan on throughout the chapter to turn into an ogre. A skill he needs to learn to control at will if they have any chance of capturing these demons. Driven by the revelation of Enma’s murder at the hands of a human; the knowledge of a human having ruined Batsu’s everyday life in the same way a demon ruined Takuan’s everyday life causes him to transform into his ogre mode and capture the panty-snatching demon for its judgement.

The chapter ends with Takuan saying that he can sort of not control the ogre power at will, and though I am glad he says he can “sort of” control it I do feel that this may have been a weak and quick way to get him control over a power that realistically should take him far longer than his second encounter with a demon. I do hope he remains having trouble transforming a bit in the future but I doubt that will happen. By chapter 3 it’ll probably be a piece of cake.

This was a pretty fun chapter and I’m excited to see what transpired next week.

Whether or not it’s the final chapter.

Final Score: 4.5 Panty-snatching Demons out of 5