Review: As the season finale draws near this episode decides to slow things down and talk quite a bit about the Sokovia Accords first introduced in Captain America: Civil War. It’s the aftermath of Tony and Steve’s confrontations in the film, and it’s also episodes like this that make me wish Marvel Studios movie division would throw a bone to the TV division for making sure the movie’s story is weaved perfectly into their own. If the TV shows can compromise like this, surely they deserve a mention or two in the films.

And that’s the first thing I will talk about with this episode it does a really good job of interweaving the Sokovia Accords into the plot of the story. Not just as a stagnant, forever looming plot device either. Through the eyes of Talbot and through the eyes of the Watchdogs the Accords move the story forward and serve the greater good of the Inhumans storyline.

The Watchdogs want to disprove the Accords effectiveness and so they target Inhumans to personally attack which ultimately leads them to falling into Hive’s trap. Talbot wants to prove the Accords effectiveness and has to win over Coulson and his team only to kind of sort of become caught in a trap of his own, although not a malicious one mind you. Talbot spends a lot of time discussing with Coulson why his Inhumans need to become registered. At one point Lincoln agrees to register, but after the revelation at the end of the episode I’m not sure how genuine that pledge really was now.

This episode also puts quite a lot of focus on Daisy as she attempts to break Lincoln out of the base via hacking into the base’s systems in order for him to come and become a part of the Hive. And I gotta say, Lincoln had me going there. Givin’ their sort of cliché and forced romance this season the fact that Lincoln wanted so bad to get out SHIELD and to Daisy that he would risk everything didn’t really feel out of character for me. 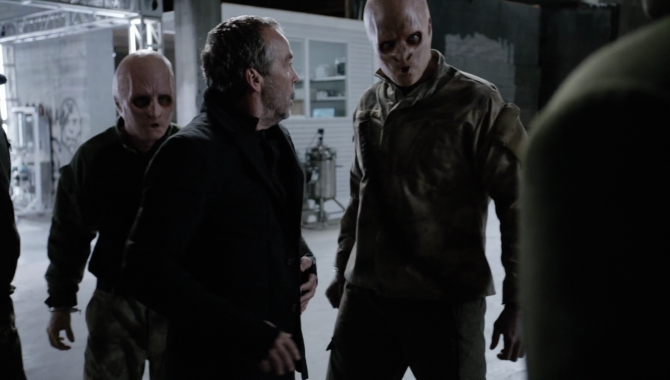 Impressively the writer of this episode – Craig  Titley – makes use of this fact and has Lincoln acting out of character all episode in a way that honestly feels like something to expect from Lincoln all episode long. Only to blind side us at the end with the revelation that not only did Lincoln fake Daisy out it with his acting but he straight up faked the viewer out as well. I loved that revelation at the end that getting Lincoln to Daisy was all a well-calculate ruse on Coulson’s part and even had Talbot confused as to just how much control his new coworker really has.

But what that revelation leads to is something we will talk about in a moment. First I wanna discuss the  “abominations” created by the good Dr. Radcliffe using Daisy’s Kree/Human Hybrid blood to create Inhumans – which are the Watchdogs from earlier in the season. Not only is this move really, really sadistic on Hive’s part, it also ends with creatures that look straight out of Silent Hill. They don’t last long, but they’re impressive enough for Hive that he wants to make more. Which means a Terrigen Bomb is coming and I cannot wait.

I also really liked seeing James finally get to some awesome work this episode and I’m glad they gave him his fire-chain-whip from the comics. It was a really nice touch to his character, even if that may cause issues with Ghost Rider one day if Marvel Studios can make a Netflix show or movie out of him. I honestly don’t remember if they have the rights back to that character just yet.

Now all of this brings me to the finale of this episode in particular. Lash. Oh, Lash. Your poor poor guy. I had figured out quite a few episodes back that Lash was created to kill Hive. It only made since that the main villain of the first half of the season would turn out to be a good guy. He wasn’t intentionally killing Inhumans, he was – out of base instinct – looking to cull them all of the Hive virus. He’s was created as the cure to Hive, not to kill him as we actually find out the very end of the episode.

But I gotta say. For sooo much time spent on this character, building him up, making him out to be this big bad and then this sympathetic beast… he was so under utilized and so quickly wiped clean off the slate. With about 5 minutes of screen time before his unnecessary death he gets in a very underwhelming fight with Hive and manages only to cull Daisy of the virus before getting his heart burnt out by James. Which I don’t mind James being the one killing him, but come on AoS show runners. You built this guy up for so long, and for what? This episode? He was totally wasted and that really, really sucks.

Also, Mack was up and moving far sooner than he should be for someone who basically got both his arms broke and one of his lungs caved in thanks to his spat with Daisy. At least that’s exactly what it looked like to me last week. I guess they’re really wanting us to believe its going to be Mack who dies in the season finale.

Other than those things with Lash and Mack though, great episode. I just wish they would have fulfilled Lash’s character arc way better than they did.

P.S.: Before writing this review ABC and Marvel made two quite significant and also extremely sad announcements to their MCU TV slate so I would like to briefly talk about them here as they both pertain to Agents of SHIELD. – Agent Carter was officially canceled. We are not getting a season 3 sadly. Of course as documented in my reviews season 2 was really, really bad. But I care enough for this character and her points in history to want that wrap-up. That end to her journey and the answer to the who shot JT mystery, as well as that damn pin from season 2. I would’ve liked a two-part TV finale even. That’s movie length, surely they can tell it in that amount of time.

Alas, unless some other studio picks up the contract, which I doubt any will, or perhaps the show runners can pull together a season 3 comic book under Marvel, or if even Agents of SHIELD do a small arc dealing with that “unsolved case re-opened” around 70 years later I don’t know right now if we’ll ever get our questions answered and Peggy’s story brought to its final, final conclusion (not counting Civil War).

Finally, Marvel’s Most Wanted was not picked up by ABC and completely left in the development hell floor. Bobby and Hunter had an amazing send off a few weeks ago in an episode I called one of this show’s finest yet in order for them to have their show here. I didn’t know what they’d really go with for the show, but honestly a villain of the week type introducing more and more low key baddies from the comics would’ve been freakin’ awesome in my personal opinion. It seems though we’ll never see that story unfold either. So either Marvel has wasted two wonderful characters or season 4 will have to see them return as sort of 6th Rangers to the main team of Rangers. Where they just team-up every so often throughout the season.

It would really suck but it’s an option. I just want to see them return and I am very sad by all of this news. Agents of SHIELD is going to be all alone on ABC going into 2017 this fall and winter break is going to feel very empty. Season 4 is going to have to bring its A+ game now.