A sniper is targeting eight seemingly unconnected people in New York City. With each carefully engineered hit we discover more about the targets, and why they have been selected by the sniper. Moon Knight confronts the sniper on a deserted rooftop as he sets his sights on his next victim. Though the battle is hard fought, Moon Knight resolves to end the bloodshed and uncover the secret behind snipers true motives…

Moon Knight #2 continues this stunning new series by Warren Ellis and Declan Shalvey. Whereas issue #1 introduced us to the white suited version of the character investigating a series of brutal murders at street level, with Moon Knight #2 Warren Ellis serves up another facet of Mark Spector’s crowded psyche, as the more “traditional” caped version swoops down from his automated glider to deal with the threat of the sniper.

The first issue of Moon Knight was a triumph in tone and style. I was thoroughly impressed with the storyline by Warren Ellis and Declan Shalvey’s artwork was incredible. Moon Knight #2 is just as good, it successfully builds on your expectations after that stunning first issue, although not in quite the same way as you might have expected.

Eight victims, eight pages, and with eight simultaneously decreasing panels of intricately orchestrated  violence by Declan Shalvey, with superb color by Jordie Bellaire, gradually draw you into this issues intriguing storyline. “Sniper” has one of the most fascinating introductions to a story that I’ve seen in a long time. With each successive hit a panel goes blank as the pure whiteness bleaches over the gore and violence in a way that actually intensifies each characters demise tenfold.

This lead in to the main event may seem a little protracted, however, when Moon Knight does finally makes his entrance, soaring over the moonlit skyline to tackle the sniper on a rooftop, it’s absolutely stunning. Moon Knight’s costume is sleeker, more streamlined, with the vivid white detailing on the suit further accentuating the darker ebony sections, but above all it is the billowing cape that is the real show stopper. It seems to frame nearly every scene, possessing an almost ethereal quality, as the action unfolds silently before us. This brutal fight happens with ruthless speed and clarity. The hyper kinetic struggle ends as swiftly as it begins, leaving as many questions as it does answers…

It seems that Warren Ellis and Declan Shalvey might give a different tone and artistic style to each of Moon Knight’s personalities as they come into play. It will be fascinating to see the character of Mark Spector and his highly overcrowded psyche explored in this way. I like the way that Warren Ellis keeps us outside Moon Knight’s thoughts during this issue, with the character remaining almost totally silent. It’s actually quite unnerving, especially when the sniper furiously asks why he can’t hit him at one point, and Moon Knight’s curt reply to the killers question is equally chilling in its simplicity.

While the conclusion is a little abrupt, Moon Knight #2 is another excellent issue in this new series. I really like the way that Ellis, Shalvey, and Bellaire tackling the character of Moon Knight, the book looks amazing as well, and the engaging storyline has me hooked. Moon Knight is great series and I highly recommend it. 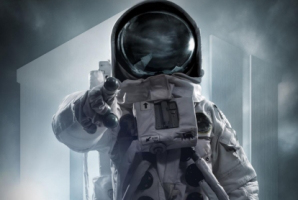