In many ways human culture is obsessed with the very nature of time as it relates to our lives.  We see ourselves through a lense of our past, though it is a biased and individually skewed one depending on what our outlook on life tends to be.  We look ahead fueled by our dreams and tempered with our worries and faults, and we try to find an idealized future within these confines.  We abstractly think of the paths and choices that may lead to such a life, trying to find direction.

This obsession goes even further as our future selves take shape in our minds and solidify, and this is where it all comes to a head.  What are we here to do?  What is our function and, maybe more important, what will we leave behind?  What will be that meaning to our life that will have the most lasting impression, staking us firmly as a memory we can no longer affect?  What will our legacy be?  It’s an ancient question, but one we still fill our heads with.  This very question is asked - and possibly answered, at least for one person - in the newest issue of Monkeybrain Comics’ “Edison Rex”, a series that is based around the very idea of the way certain choices can completely change your life, and the consequences and benefits that can come from it.

Okay, enough with the dramatics.  For those unknown to the series, Edison Rex is a man once conflicted.  Beginning as a hero turned supervillain, Edison made the wrong choice during a meeting with the superhero Valiant - his nemesis - that took one life and forever changed another.  After accidentally killing Valiant, Edison swears to become a hero once again, using his evil tools and brilliant mind for good.  Over the course of 15 issues, Edison has collected a varied group of ex-villains to join in his fight, and has gone a long way to prove that he is no longer the villain the populace once knew.

Issue #15 opens with the intro of yet another great villain (there are a ton of awesome characters in this series) Vlad Nauseum, whose only power seems to be the ability to make someone puke their guts out.  In the scheme of things with this comic it makes perfect sense - it’s just that kind of comic.  It’s one of those that will have you laughing away wildly, only to smack you back to the ground and into a scene so heartfelt you almost want to make sure it’s the same book.  Edison does away with Vlad by arriving on the scene under hilarious circumstances (he had Jury Duty nearby) and that’s when the future comes knocking.  We are introduced (along with Edison) to the time traveling trio of Kid Apex, Dark Son, and Nebulass.  Each of them sporting individual costumes that mimic one from Edison’s present (including a Valiant design, which I found to be an interesting choice), the trio quickly explain themselves.  Why have they traveled to the past?  To meet Edison Rex, the man whose example has inspired them to “new heights”.  They are his “biggest fans” and in a big way reflections of what could have been for Rex himself had he made different choices.  These visitors are not just fans, they are a direct result of the final impression Edison’s life had left.  They are, of course, his legacy.

“Edison Rex” is always such a beautiful book to read, and this issue even raises that bar a bit.  It has all of the silly and sad that we’ve come to expect from the minds of Chris Roberson and Dennis Culver.  Their collaborative stories are always so seamless, as if written by a single writer, single mind.  It reads easily while still keeping the brain interested, with the jokes and fun being more entrenched in the heart of the book than outright one-liners.  Culver’s art is crisp and tight with figures that are lightly detailed and thickly outlined, and backgrounds that tell enough of the area while keeping it loose and effective as set pieces.  Stephen Downer’s colors really stand out in this issue as the changes in hues, glowing brilliance of the superpowers and lighting, and the basic colors of the uniforms create mood and strongly accent the emotion.  In some panels the color tells the story more so than the words or expressions, using the palette to convincingly change the mood and intent during the course of a conversation.  It’s just beautiful work from the entire team, all wrapped together in the pitch perfect way that this entire series has been running on from issue #1.

But it makes me wonder, and this brings us back to the beginning of this review - if your future legacy followed you to the present, would you like what you’d see?  Or would it be a distorted version of your original intentions?  Edison Rex gets that chance, and you’re not going to want to miss it.  Edison Rex #15 may be the best issue yet, but it’s just one of those series.  Can perfect get any more perfect?  I’ll be checking in for issue #16, either way, and so should you, because I think with this book it can.

You can purchase issues of “Edison Rex” from Monkeybrain Comics HERE. 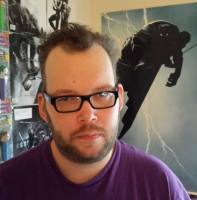