Have you ever read a book you really wanted to love but after reading it just didn’t do it for you? Well Iron Patriot #1 is that kind of book for me.

First of all I love Ales Kot’s writing, he is one of my favorite guys currently making their presence felt at Marvel, his Secret Avengers #1 just knocked my socks off last week, but this time around I just didn’t feel the same wow factor. The writing on Iron Patriot is certainly competent it just lacks any real heart, its flat both in character development and premise. Kot has proven that he can write dynamic characters in complex and engrossing situations, however none of that makes it into this book.

The premise is rather one dimensional so that doesn’t give Kot a whole lot to work with, add to that the drab characterizations and you have a technically well written story with absolutely no one in it to care about. I like James Rhodes, he is a wonderfully engaging supporting character but Marvel has tried time and again to give him his own book, whether it is as War Machine or filling in for Tony Stark and each time the title fails to generate much excitement or garner any sizable readership. I realize Kot had the deck stacked against him going into this but I also know that he is the caliber of writer that could pull this off and with Marvels recent success with second and third tier characters I honestly thought this could be another hit. This is by no means a terrible comic book, it’s paced well and visually Garry Brown does a bang up job particularly on the Patriot armor and on the few action scenes in the book. I just felt like I was waiting for something that never happened.

The story begins inexplicably with Rhodes dying, presumably during some rather extreme combat that has left a city block in ruins. The narrative goes on from there, in a recent flashback, to examine Rhodes’ relationship with his father and niece as well as his decision to limit his military involvement to operations occurring on American soil, unless it is a rescue mission. This decision seems to have divided the popular opinion and caused an outcry of internet protest. Kot does a fine job of examining the dynamic that exists between Rhodes and his father but the rest of his backstory feels slightly hurried, many major elements are distilled down to a scant mention. Rhodes’ niece Lila is a smart, spunky girl with lots of energy and presents the potential for a multitude of interesting stories. However, we don’t really get the chance to figure out who she is at this point, she is just kind of dropped on us and it is left up to us to figure out where she fits into the narrative. Another problem I had with this book is the lack of any real antagonist; the only physical villains are these faceless living mud creatures that Rhodes makes very short work of simply by flying through them at high velocity. There is an allusion to a shadowy figure giving an order over the phone to abduct Lila as well as presumably Rhodes, but we only see this character from behind and in a single panel.

Visually Garry Brown turns it up a notch in the final five pages. His interpretation of the Iron Patriot armor is highly detailed and extremely cool. The action sequences, few though they may be, are nicely rendered with detailed backgrounds and a real sense of energy throughout. Brown’s art works well with the narrative, I only wish the story would have been more dynamic and provided him more of a chance to shine. The storytelling overall is precise and well-paced. This book does not suffer from being handled poorly; quite to the contrary this is a fantastic creative team and they produced a very solid comic book from a mechanical standpoint, it just lacks any soul. I would not discourage anyone from reading it but there are far more engrossing books on the racks this week. I’m not sure if I will be here for issue #2 but after all the set up done in this issue I almost feel obligated. If your funds are tight I would sit this one out, Marvel has loads of other number ones that give more bang for the buck. (3/5) 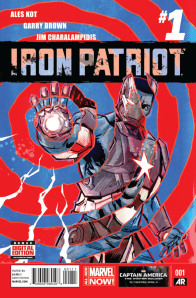