In 1989 I was fully in the thrall of the X-Men and Spider-Man, but there were other books out there, something mysterious called “indie” comics, that would shape my later life. 1994 saw the release of The Crow, the Brandon Lee film, and I was enthralled. It was a superhero movie. We were on the heels of Batman Returns, and still blissfully unaware of Batman Forever. This was the dark hero we saw in the Frank Miller books, the gritty character without the qualms about killing the bad guy. This was the [email protected]#in’ CROW!

So. I liked The Crow. It was everything I thought it should be without ever having read the original books. I still haven’t read the original, though I hear it’s splendid. I did see the City of Angels film, and kind of still enjoyed it, but it didn’t have the impact of the original.

Here’s your history lesson. The character was originally created by James O’Barr for Caliber Comics, the indiest of indie books, drawn by the writer, or written by the artist, his vision of redemption and revenge, the anti-hero’s anti-hero. Over the years the Crow has taken several forms, always inhabiting one who suffered a wrongful death, come back to avenge those that were taken from him or her. The wrongful death is really the key, and when the victim is resurrected there is all manner of anarchy and blood and death to follow. That’s what I love about this character.

The Crow: Pestilence from IDW came out today and it is a perfect example of the Crow mythos. Salvador is a fighter in Juarez, Mexico. His motivation is a new life for his young wife and child in America. He’s involved with the SDC (Saint Death Cult) who pays him to take a dive. He promptly pulls a Butch (without the killed Floyd) when he tries to escape with the loot and the girl.  He is of course caught and…Salvador later becomes the Crow.

At first the design threw me. The Salvador Crow looks quite a bit like the son of Wolverine. The scars and tattoos on his arms and chest combined with the Mohawk/ponytail and white skin make him look like Daken, but as the book progresses, you can see that that was just an artists’ rendering, and you lose that impression after seeing Salvador alive and then later as the Crow. Drew Moss (The Colonized, In the Dark) does a fine job of rendering the Crow, and makes him seem the badass he’s supposed to be.

Frank Bill has the reins with this one, and has delivered the Crow book you want to read. It’s the bad guys getting, not a jail sentence, not a term in a hospital for the criminally insane, but justice in the most vigilante terms. “Do unto others…” and all of that. I like the idea of a trained fighter being the Crow. Brandon Lee was in a band. Remember how much ass he kicked? What could an invulnerable undead boxer do? He builds the tension even though you know that Salvador must die, and must die horribly, to become the hero, and he leaves enough hidden that you want to have issue two ready to go, and then curse the monthly release date.

The Crow: Pestilence is not only the next chapter in the Crow series, but an excellent tribute to the original O’Barr vision, of a dark character with dark motives, unencumbered by the weight of human law. Justice reigns in the Crow’s world, and woe unto those who have done wrong.

Click Image to Purchase “The Crow: Pestilence” #1 From Amazon.com: 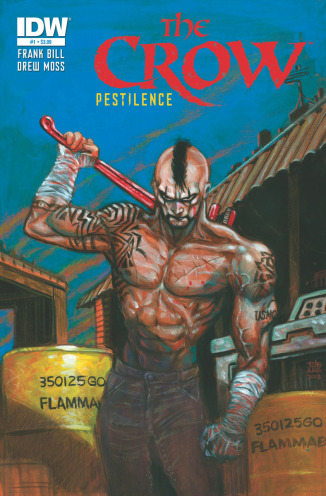 One thought on “REVIEW: ‘The Crow: Pestilence’ #1”