Summary: This is the story of a school where humans and youkai exist in harmony. When human student Atsushi Fukuzumi confesses his love to the beautiful and kind youkai Muku Shiroishi he finds out their love is not to be. Not because she doesn’t want to be with him, but because she’s a snow youkai and kindness and warm feelings literally melt her. And so all of Fukuzumi’s love is slowly killing her. Thus their platonic friendship begins and a zany school life filled with all manners of adventures ensues…

Review: Do you like Azumanga Daioh? Then you will love this. MMGTCFY is brilliant. Let’s just get that out of the way.

It’s a 4-koma style comedy venture – much like .hack//4koma I reviewed awhile back – about a group of friends whom mix between humans and youkai. Fukuzumi likes Muku but his love literally kills her, Muku is the daughter of a high profile youkai and is sheltered from many different things in life. She’s also a badass who fights other humans and youkai who would threaten her mother’s status.

There’s Fukuzumi’s best friend Shuya Misono who’s a cat youkai and can even talk to cats. To round out the cast is Mana Kikusui, a fish youkai. Shinogi Hibarigaoko, a human who carries around knives and can kick major butt, and her best friend Jyunon Susukino, a human black mage who has a major crush on her. Three humans, three youkai, a well-rounded cast each with their own set of unique abilities and personalities.

Like any 4-koma (4-panel comic, by the way) manga there is a joke in every strip. And a good 4-koma doesn’t just see each 4 strips being a joke but also allowing those jokes to intelligently and naturally carry the story and evolve the characters. Volume 1 alone covers 19 chapters (or “seasons”) of this series with each chapter carrying with it many different 4-panel strips. A lot happens in this volume and by end you feel as if you’ve known these characters for awhile. You’ve been on a journey with them. 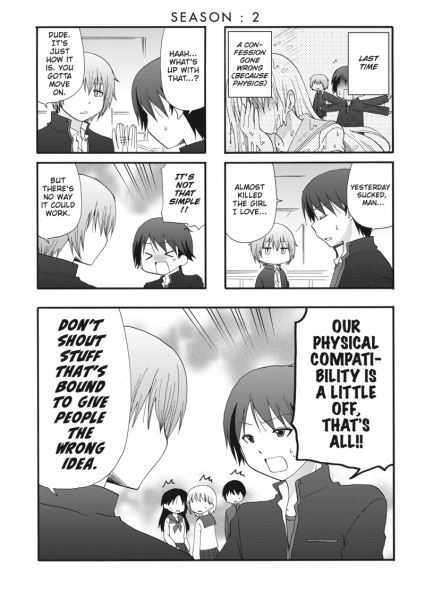 Yes, volume 1 isn’t even the full story as the series is still ongoing but even if you just read volume 1 you could walk away satisfied having laughed out loud literally every page. Every joke is delivered with brilliance from the characters and all of them range from wholly innocent to mature – although hidden in a way that kids can read this series as well.

In the beginning most of the jokes center around both Fukuzumi’s idiocy as he just doesn’t understand many situations to Muku’s innocence as a sheltered youkai. As the series progresses though Fukuzumi almost becomes like a background character as Takatsu chooses to give a lot of screen time to the later additions to the cast (those final 3 names I mentioned before).

Mana is a mermaid who constantly mixes her breathing up between her gills and her lungs at the wrong times and finds herself either drowning or suffocating. But has a lot of fun with being a potion and poison maker and attempting to figure out which ones work on humans. Fukuzumi is generally her target for such tests.

Jyunon and Shinogi are the best pair however because both are living on their own in a one-bedroom apartment after Shinogi’s family business went bankrupt due to debt. Shinogi gives no effs, talks like a medieval westerner, and is constantly flustering Jyunon who loves her. Jyunon is dealing with puberty at its height as he can barely function when he’s round Shinogi. Jyunon is that male character who gets embarrassed by the idea of seeing a girl without her pants on, but is surprisingly refreshing in the way he acts as well because he’s just so gosh-darned likeable.

And finally Shuya is constantly battling his animal instincts as a cat. Muku and Fukuzumi often take advantage of this by playing with him using generic cat toys. It’s rather funny to see and that imagery is definitely not lost on the main characters. Shuya also acts as a voice of conscious for Fukuzumi when his friend gets a brilliant idea that is just not that good when you think about it. Does Fukuzumi ever listen? Not really, but their chemistry is really fun to read.

I also very much like Takatsu’s art which in this series is mostly chibi. Her art is quite adorable and fits the tone of the series extremely well. Even when the character are chibi and doing epic things they still feel epic and the over-exaggerated faces she gives them during moments of clarity and revelation tend to bring the jokes home in full force whenever they occur.

My Monster Girl’s Too Cool For You is a really, really fun series and I cannot wait to read more of it. I highly recommend all of you reading this check it out and add it to your immediate to read list. You definitely won’t regret it.

Final Score: 5 Moments to Literally Melt Your Heart out of 5