Do You Smell Something? Story: James Dufendach Art: Brad Hudson

Halloween is a time for trick or treating, costume parties, horror movies, and for comic fans- comic book Halloween issues. There is nothing better than seeing your familiar heroes and villains thrown into the backdrop of a holiday, but the one-off from scratch holiday stories are some of my favorites.

Baltimore’s own PLB Comics has given us just that in their October Halloween Special with three original horror slanted stories.

All three stories are a lot of fun, and give the reader a Twilight Zone-esqe feel to it. They are short, sweet, and give us just the right amount of Halloween story in a Fun Size serving. 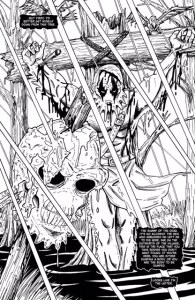 The first story, Who killed Mobie Graye?, may have been my favorite. It is a hard task to set up a world, and Josh Shockley does this perfectly with an extremely limited time frame. A small town sheriff trying to solve a murder is common place in story telling, but this is in a fantasy setting with alien characters that makes the ordinary premise far from ordinary.

The second story, Night of the Hay-Men, is a fun throwback to the Children of the Corn type of movies from the 70’s and 80’s. Two college kids broke-down in the middle of nowhere with the misfortune of looking for help in the wrong place, classic stereotyped horror at its best.

The end cap of this trifecta of horror goodness, Listen, Do You Smell Something?, truly is something that could have been a Twilight Zone or Tales from the Crypt episode. A bike messenger is hit by a car, wakes up in the hospital alive, but with a skewed view of reality. If you are looking for a fun dose of Halloween horror, PLB Comics Halloween Special is the book for you. It’s not Shakespeare, but sometimes you want junk food, not filet mignon. They all have their place, and on Halloween, candy is king!

Jonathan Winchester is a writer from Dallas, TX where he lives with his wife Maddie and their annoying cat. He believes Han was the lone shooter, that nothing looks better than a silver age comic in Mylar, and that there is no better feeling than walking into a dimly lit movie theater. Twitter- @TexasWingnut