Story, Art, Colors, and Book Design by RUN
Book Layout by Dorothee Bachy
Whoa, this book came out of nowhere for me, and left me very affected and wanting more. It was very, very good.

It started with a bunch of preliminary stuff that I initially skipped and went straight to the story; I later went back and read it, which gave kind of a history of the project and characters. The end of the book had a bunch of extra art, and pinups, etc, which made for this to feel like a very comprehensive and extra padded-with-goodness package to feast on. But forget all that fluff, the comic pages are where it’s at. 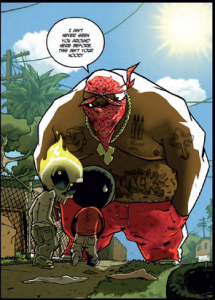 I won’t talk too much about the story itself, not that it’s bad or anything, but because it wasn’t the focus of the wow factor for me. It’s a chase heavy, fugitive style story involving a couple of very cartoony characters Angelino and Vinz. Angelino is a humanoid type character that is largely a giant black-colored round head on a smallish body that couldn’t support it if this weren’t a comic. Vinz is a kind of short, stumpy urban-looking flaming skull headed guy. I like the character designs a lot, and how they are both kind of weak and downtrodden at most times. So, the story itself, although not resolved in these pages, is good but not great. It’s the sense of place, and the style of the art and the action sequences that shine here. I would get this back of the shelf for a re-read any day just to soak up the sumptuous art. It reminds me of Sin City that way. The story of Sin City is nothing mind-blowing, it’s pretty “hard boiled” and soaked in genre, and a more than a little over the top, but it’s, let’s say not very complex. It’s that art that brings you back every time. Same thing here.

The environment looks so well thought out and real, I feel like I could walk right into it, but would be too afraid to given the violent goings on in this story. It’s very urban LA, only several shades darker. “Dark Meat City” is explained as LA’s darker and dirtier and more violent worse half. Run employs aspect to aspect transitions to help build that beautifully rendered ugly city, which are not seen as often as they should be. Another strong attribute is the character types, body shapes and facial expressions. Besides evoking Sin City, I got a Felipe Smith vibe at times, (hints of Smith’s MBQ series) as well as the French cartoonist Boulet. If you are not familiar with those guys, just know that that was high praise. And go look up Felipe Smith and Boulet. You will not be sorry.

I’m not sure I can even do the art justice by describing it. It’s (at least in my eyes) virtuoso work. Just check out some of the panels on this page for a tiny sample, then go out and get the book for the whole experience. The art is so dense, yet not cluttered. It’s very well balanced. 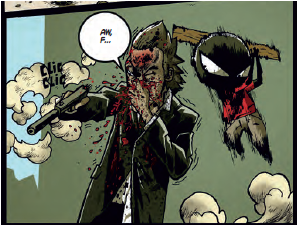 One thing that the story did have going for it that I am realizing flipping back through it is that it kind of breaks from the plot a little here and there to weave in elements that obviously must influence Run, like Luchadore wrestlers, the Twilight Zone, American politics, MIBs, cockroaches, UFOs and other esoteric elements that build up a unique identity for this book. It’s kind of an extension of the world building going on in the visuals of Dark Meat City. It’s really very pleasing to enter into the space that Mutafuckas creates around you. So highly recommended.