The idea of the secret identity is as old as the idea of the super hero. Countless comics have explored and played with that theme, from Clark Kent verbally jousting with Lois Lane, to Bruce Wayne gadding about town with a starlet, it’s a common trope that will never get old.  It’s been established that people with powers should hide who they really are. The enemies that plague them would visit untold horrors upon their families if they knew. How awful was that page when Eddie Brock showed up, kissing Aunt May on the cheek and we all knew he was Venom? Up to this point, the emphasis has been on the hero, with some minor drama playing out while he or she is out of costume.

Brian Joines and Jay Faerber are going to change that with Secret Identities #1, due out in February from Image Comics.

The Front Line is a super hero group like any other. Its components are key and familiar to anyone with a comics reading history. They’ve a meeting place, the hollowed out shell of their first enemy. While not strictly Canadian (hold your horses, Alpha Flight isn’t returning here) they do operate mainly from Toronto. There is a leader, the muscle, the robot, the jokester, the dark and broody secretive type, the speedster, and the newcomer. The most popular comic book teams have all of these archetypes or some combination thereof. But Secret Identities is about exactly that. The other lives that these heroes have. This story shows how secret those identities truly are…and there the spoilers end. 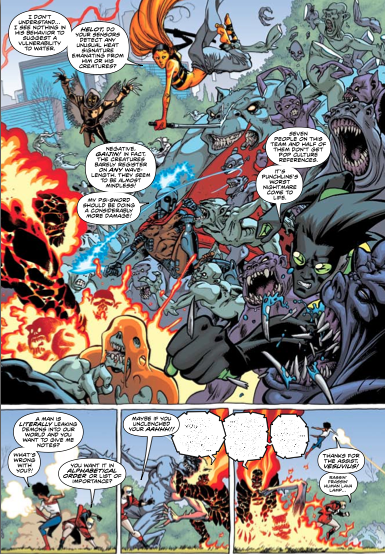 Brian Joines, whose great humor went into last years’ Krampus (also from Image) and Jay Faerber (The Titans, Noble Causes) are turning the mirror around, proving in this book how depressingly normal superheroes can be. It’s an intriguing, voyeuristic look into their lives, one that will have us thinking twice the next time Peter Parker claims to have missed the bus.

Ilias Kyriazis (Ghostbusters, GalaxyQuest) pencils and inks and Charlie Kirchoff (Dr. Who, Judge Dredd Classics) colors this book in a way that keeps the seriousness while celebrating the fun that should be inherent in comic books. Kyriazis’ forms are fluid and animated, but he’s still able to convey bits of the sinister nature of characters as well. Kirchoff’s colors are vibrant, keeping to that Saturday morning cartoon feel. Together their art is on a level that will keep you looking at their work long after you’ve digested the reading end of it.

Brian Joines and Jay Faerber have taken what I thought was the most clichéd of the super hero tropes, the hidden identity, and revitalized it. With a couple of pairs of fresh eyes they have created a shadow behind the polarized goggles, a dark alley that runs behind the hidden lair. Secret Identities, though it doesn’t drop until February 18th, should be on your list of books to pull. It will keep you guessing and leave you wanting more.