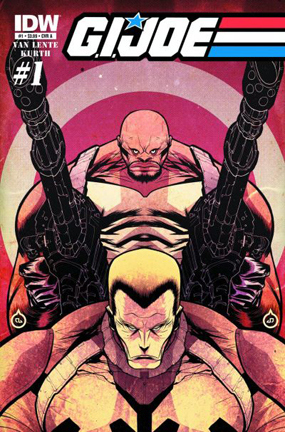 A while back I was asked what I was most looking forward too about the 2013 comic industry. While I couldn’t pin just one down, I knew for sure that the relaunch of the entire G.I. Joe franchise was up there. The team of Fred Van Lente and Steve Kurth delivered a nice start to one of America’s most iconic franchises. The art is definitely the best aspect of this book, vivid, vibrant, and alive, it captures piece by piece the drama and immense action this book delivers. I don’t think I can express just how fabulous the art is. While the art was fantastic, the story was much less dynamic. While it served as a fantastic introduction to the characters involved, the plot was set up poorly. The Joe’s were sent into a mission that was poorly explained. Thus the reveal that Cobra was in control of the town they visited ended up not being a big deal. There was plenty of humor involved with the issue, which was refreshing and nice, but the overall set up was poorly set up. That being said, it is still one of the best war comics to come out of comics in the past few years. The characters are dynamic, and the direction is clear. The comic simply stumbled upon execution of its first major hurtle.

Overall a solid read, and of surprising quality. While many have laughed, the relaunch of G.I. Joe seems to be just what the franchise needs. If you have ever been interested in the title or are just looking for a good read, then this is your comic.

WRITING:  6 /10  - Nice direction, but stumbled with the execution.