Typically the night before the big Baltimore Comic Con would find me digging through my collection, searching for that perfect issue to get signed by one of my favorite creators or painstakingly poring over my notes for panel questions or just making lists of comic books I intend to attempt to find in some forgotten long box overlooked by hundreds, maybe thousands of previously hopeful con attendees, however this convention eve was quite different. On this particular Thursday evening my local comic book store, the mighty Universal Comics was to host one of the industry’s brightest rising stars, Matt Daley, scribe of Lantern City. 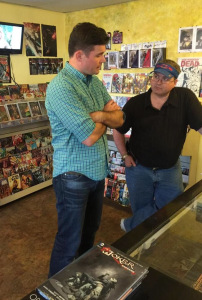 If you haven’t been reading Lantern City you are missing out on one of the most imaginative series being published today, that includes anything by the big two. Lantern City is a dystopic tale full of intrigue, adventure and heart; it is emotionally charged and darkly poignant. The protagonist, Sander Jorve is a man alone raging against the evil mechanisms in place that threaten the people in the lower class sections of Lantern City where the people live in nearly perpetual darkness. He will do anything to protect his wife and son including infiltrating the ranks of the ubiquitous Guard; posing as deceased captain he gains access to the inner realms of the evil empire. Once inside, Sander is plagued by the villainous Sootoh, who seems to see through Sander’s façade from the very start. As the narrative unfolds and the complex, multi-layered plot takes shape, Sander finds himself cast in multiple roles; father figure, surrogate husband and perhaps the most unexpected, confidant to the enigmatic leader Killian Grey. This begins a journey that will try Sander’s very soul, his beliefs and stretch his abilities to the absolute limit.

The first issue of Lantern City was co-written by the prolific Paul Jenkins. Jenkins has worked on just about every character you can think of, including some of the biggest of the big two; Wolverine, The Inhumans and Hellblazer, to name just a very few. Although Jenkins’ involvement with the book ends after the first issue, due to the enormity of the writer’s workload, Daley is more than capable of soldiering on with the writing duties of Lantern City, in fact his doesn’t miss a single step when taking center stage as the series writer. The book was the brainchild of Daley along with Trevor Crafts and Bruce Boxleitner, who brings a pretty hefty sci-fi pedigree to the entire endeavor. 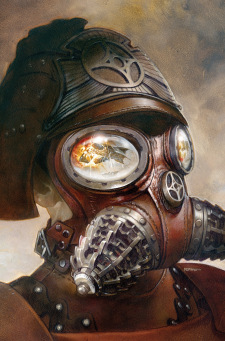 The atmosphere of Lantern City owes as much to Blade Runner as it does to steampunk, this is most likely due to Daley’s love of film. There is an unmistakable cinematic vibe to the series that is fostered by Daley’s rapid-fire pacing and fantastic dialogue. These characters speak in authentic voices as opposed to some of the more jargon laden science fiction tomes. Sure Lantern City has its own vernacular of sorts; for example Daley references the spirituality and culture of this world as well as the lineage of the characters, Sander and Killian speak of the Fortache Warriors and their influence on current society. This is world building at its nuanced finest, which is exactly what Daley is about with Lantern City. He and fellow creators of the series have their eyes firmly fixed on the screen where Lantern City is undoubtedly headed. Daley said that from its inception, Lantern City has been intended for multiple media outlets. His idea is to explore the many layers of the world in different properties including; comic books, novels, films and video games. This, he tells me has been part of the project’s plan since day one. By setting his narratives in varying timelines and settings within the Lantern City worlds, Daley is confident he can keep the intended audience captivated.

The look of Lantern City is as unique as the story and characters; the imposing, intimidating look of the sinister Guard armor takes its inspiration from the ancient Samurai as much as the architecture is influenced by the Gothic cathedrals of the renaissance. This all comes from the mind of series artist Carlos Magno; known for his imaginative work on The Planet of the Apes series, Magno has the uncanny ability to blend the elements of an established world with his own style without obliterating the existing world but enhancing it. Daley’s one rule, “The world has to feel real” to this the writer adds, “Everything has to have a purpose and nothing can exist just because it is cool.” Instead of gimmicky visuals and lots of splash pages, Daley relies on the history and conflicts of the world, the class system and what it takes to keep a people oppressed and perhaps most importantly, how to maneuver through all these machinations. In fact Daley addresses all of these points in the prequel, illustrated prose novel set in the world of Lantern City a few generations earlier entitled, Rise. This work perfectly introduces the origins of the conflicts that have formed the societal hierarchy of the Lantern City worlds. 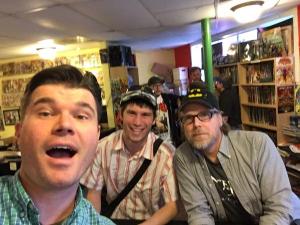 On the surface Lantern City appears to be extremely political, however at its core, the narrative is not so much about politics as it is about how the characters are impacted by these politics. In fact it is the characterizations that drive Lantern City and in much the same way that Gotham City is a viable character in any great Batman story, the city itself is one of the most intriguing characters in this complex, multi-layered narrative. It is about facing obstacles and doing what has to be done to overcome those obstacles or even more importantly the impact of those obstacles on each of these characters. Sander’s story is one of family and fighting to keep a family together at any cost. He even takes on the guise of what he finds most reprehensible all in the course of protecting his family.

After five issues of great storytelling I had to ask Matt what comes next for Sander and company to which he replied, “This is only the tip of the iceberg”. I was left mumbling incoherently about Sander and Killian and what was to come of them, when Matt, gentleman that he is suggested we do another interview after the next six issues to discuss these questions circling my head like a squadron of tiny inquisitive fighter jets. To which I was more than happy to agree.

Lantern City is an on-going series published by Archaia.