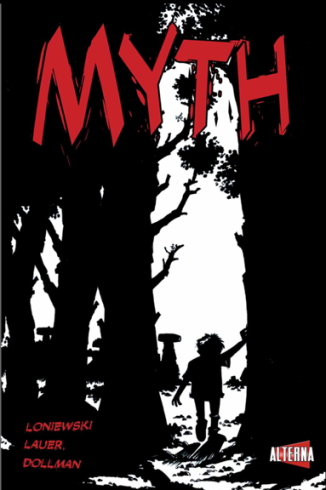 “Myth” is an upcoming title from Alterna Comics, set to be released on March 13th, and is a dark fantasy story told though the eyes of an imaginative but troubled young boy named Sam.  He lives in a spooky Orphanage, where the boys are abused and tortured in various ways including being whipped until raw or chained to the dank cellar walls.  As if built by the pure pain and suffering within its walls, the Orphanage resembles DC Comic’s Arkham Asylum mixed with Norman Bate’s house - angled walls and roof, the whole building almost cutting right into the sky above.

We meet Sam for the first time as he is being returned to the Orphanage, caught after yet another attempt to escape, and given back to the care of Mrs. Morrison, the woman who runs the Orphanage itself.  She is a cruel and venomous woman, with mad scientist hair and a constant scowl.  She sends Sam straight down to be chained to the cellar walls below, forgetting that due to Sam’s small wrists he can easily get his hands out of the shackles.  Having done so, he makes another escape attempt, hurrying out of a cellar window.  Running, he heads for the one place he thinks adults are too scared to enter - the surrounding forest they all tell the kids is filled with beasts, ghosts, and the like.  He finally finds a spot to rest and leans against some rocks, noticing some ‘weird lines’ on them but not caring.  He opens up a copy of his favorite comic book “Raven Comics”, and quickly gets down to reading.

As Sam is leisurely reading his comic, he is startled into action by the loud growling of something behind him - a something that turns out to be a giant tree ‘monster’ of some sort, heading towards him with branch arms flailing and sharp, wooden teeth.  As Sam is about to be done in exactly as the adults had told him, a large man appears and destroys the tree creature.  This man, later named ‘Giant’ by Sam, is a mute and shirtless man in a pair of overalls, giving him a ‘farmboy’ look.  After battling the tree, Giant moves on, with Sam in tow.  Catching up, he thanks the Giant by giving him an issue of “Raven Comics” and, once he sees the blood coming from Giant’s right shoulder, dresses his wound.  To me, this scene shows how fast Sam has had to grow up in his hardened surroundings, and has more of the mindset of an adult than a child.  His innocence - what is still left of it - is apparent and flashes alive here and there, but he’s obviously had a brutal life.

The story continues on its path, and eventually we are  introduced to both “the Guard” - monstrous super villain looking ‘men’ who arrive by being pecked free from out of rock by ravens - and an old man speaking with an owl about whether or not the heroes will be ready or able to stop what’s coming.  The first issue leaves you with a great scene where Sam realizes that they are fighting the ‘bad guys’, and were therefor doing the same as Superheroes.  They quickly piece together suits, and set off into the night for some rescuing.

The forest itself is a very creepy and dangerous place, and it is well represented in this story.  The writing by Mike Loniewski is awesome, original, and as fun as it is demented (in a good way).  At first look, this might sound like it’s straight out of a children’s book, but while reading I couldn’t help but feel like this was all metaphors for a lonely, abandoned boy’s desires for love, purpose and a strong father figure in his life.  Being a Superhero with Giant fills in for the missing roles and the emptiness he feels.  When at our most desperate, sometimes just feeling like you’re a part of anything positive is a very powerful thing.  Being a part of such a grand picture - and one that is sure to grow in the coming issues - would most likely make Sam feel as if all his dreams have finally come true.  To that, I wouldn’t be surprised if this series ended with Sam having dreamed it all up while staring longingly out the window of the Orphanage.

Dan Lauer’s art is almost like a comic strip, as if Calvin & Hobbes were mixed with some of Walter Simonson’s more cartoon-y looking work, but the work is very ominous, with stark thick lines that really drives home the overwhelming weight of sadness that is this boy’s life.  While there isn’t much use of shadow, it maintains an overall foreboding atmosphere, keeping you in the excited yet depressed mood of it all.

This title may not have given me the most uplifting feeling, but for a comic to evoke any emotion in its readers is highly commendable.  I will definitely be continuing to read Myth as the issues are released.

All proceeds from the sale of the first digital issue, will be going to ChildHelp.org

You can find information about “Myth” and a ton of other great comics by visiting Alterna Comics here: http://alternacomics.com/