Step right up to my soapbox ladies and gentlemen, the love-fest is about to begin.  I just read through Ghostbusters International Volume 1.  It is, as per usual, everything you’d want out of a Ghostbusters story and more.

I have no small about of love for this run of Ghostbusters.  From the beginning of IDW’s ownership of this comic it has been done with all faithfulness to the original story, and filled with all kinds of little throwbacks that show how versed Erik Burnham is in this universe.  But I’ll get to that in a moment.  First, a brief synopsis.

This trade follows the Ghostbusters crew as they are shipped around the world by Erland Vinter, a businessman who has it in mind to make “Ghostbusters” a trademarked, internationally marketable business. (Oh…the horror.)  This story sports the usual cast, the original four ghostbusters and Janine, plus a group added to the universe for the comic.  Kylie Griffin, Jenny Moran, Special Agent Melanie Ortiz, and the always prickly Walter Peck.

After being rented out to Vinter in the first issue, the boys head overseas minus a recovering Egon (see previous issues) to take on the ghostly creatures that are haunting around Italy and France.  This story is revolving around the Vinter’s mysterious intentions regarding the fate of the Ghostbusters, but don’t get excited about seeing it resolved in this trade, because he is still slyly smirking into the panels at the end.

This is a great book, worth every penny, and re-readable, which is sometimes rare in comic books.  If all you’re looking for is a recommendation, there you have it.  If you don’t want to read a grown man gushing over creators, then stop now and go put this on your pull.  3…2…1…you’ve been warned.

I’ve read the previous comics in the IDW series.  They’re all great, and this is due in large part to Erik Burnham and Dan Schoening.  Mr. Burnham has such a familiarity with the characters that he has captured who they are so that everything they say make sense and seems true to form.  One thing that really struck me in this trade as that there are several page chunks where no actual “action” (particle accelerated beams shooting through the air, slimy ghosts screaming in rage, etc.) happens, and still I find myself engrossed in the story.  It’s Burnham’s writerly crook guiding my sheep’s brain through the comic, keeping me hooked like the four-color junkie I am, those four colors added to Dan Schoening’s art by Luis Antonio Delgado. 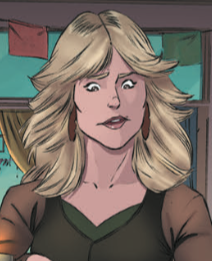 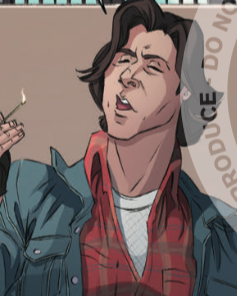 Dan Schoening’s art is so perfect for this story.  It’s the combination of the realistic and the comic, the caricature and picture perfect simultaneously that make it a joy to look at.  His designs for the ghosts are wonderfully scary.  He does little homages in the art, much like Burnham does with the script, that will have you double-taking at  panels and saying…”hey…that looks like…”  He calls back to the original film in the first couple of pages, using the coed from Dr. Venkman’s psychic study as a medium.  The things he does with perspective blow my mind and make me want to pull out my ruler and practice. 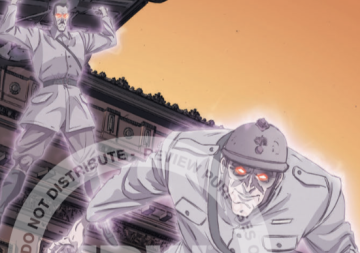 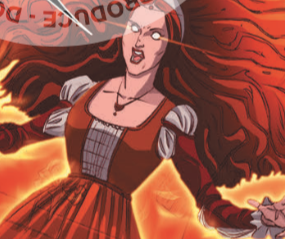 The colors, unfortunately not often mentioned when describing a comic, are integral to the reception of the art.  Allow me a moment to digress.  (And honestly, if you’ve read this far, what’s a little more digression?)  In the new Ghostbusters trailer the main thing that bothered me about the look was the coloring on the ghosts.  It looked kind of like a Scooby Doo movie.  Delgado’s work on the colors in the comic is so great that it makes me want to re-watch that trailer, and see if perhaps I can afford a little more leeway into the coloring of the film ghosts.  He blocks them out in one hue, and then varies the gradation to color the figure.  It’s really great stuff.

All right.  If you’re just rejoining us.  In Ghostbusters International I see what I’ve come to expect from Erik Burnham and Dan Schoening.  Greatness.  It’s not just that they’re making cool Ghostbusters stories, it’s that because of their faithfulness to the original, both in concept and creation, they are creating the canon for future writers and artists.  As was done with Ghostbuster I and II and The Real Ghostbusters, this IDW run will be seen as the next part of the story, and I can’t wait to see where it’s going.