Marvel has some major changes in store for us as we approach the end of 2014; Sam Wilson taking over the mantle of Captain America from Steve Rogers, Tony Stark moving from the Invincible east coast to the Superior west coast in a bid to become the Steve Jobs of the 616, Wolverine’s death and the one that has the internet buzzing END_OF_DOCUMENT_TOKEN_TO_BE_REPLACED

Although technically the final issue of this glorious run, issue #25 is more of a bookend bridging one amazing chapter in the epic saga of Thor’s life to another intriguing and increasingly tantalizing chapter full of exciting potential. END_OF_DOCUMENT_TOKEN_TO_BE_REPLACED

The Twilight Zone #4.  What can I say about this comic, as it hits the stands this week, that I haven’t already said in reviews for the previous three?  Dynamite comics is on the forefront of the comic reboot business, and they’re doing it the right way, getting top talent to breathe new vibrant life into books whose rights might otherwise be moldering in a drawer in the basement of some abandoned comic warehouse somewhere. END_OF_DOCUMENT_TOKEN_TO_BE_REPLACED

HELLO COMIC BOOK LOVERS! My name is Joshua Selser and I will be your tour guide through the madness which is “LOKI: Ragnorok and Roll”, a breath of fresh air in this medium of four color wonder we all embrace.

I found myself having mixed feelings about Loki: Agent of Asgard #1. On the one hand, I loved all the mythological references when it came to trickster and mother gods/goddess. On the other hand, I felt that Ewing and Garbett were trying to put too much information in one comic. Ultimately though END_OF_DOCUMENT_TOKEN_TO_BE_REPLACED

Things to Come for January 2014
with Kenneth Kimbrough

Welcome to 2014, the year we first get attacked by kaiju and the year when Solid Snake grows a pretty rad stache. As a part of the new year, I’m introducing a feature to the site in which I highlight new releases, reprints, relaunches and just about anything else that tickles me. All of this information can be found in the retailer catalog—PREVIEWS—which your local comic store should carry. END_OF_DOCUMENT_TOKEN_TO_BE_REPLACED

When I started this crazy thing called Bag & Bored I was looking for something to kill some time and have some fun with.  Nothing big, no readership - just silly meanderings on whatever comics I had read that week.  Consider my surprise that here we are over a year later and with quite a cast of reviewers and writers on our team.  One of the major pay-offs with this site has been END_OF_DOCUMENT_TOKEN_TO_BE_REPLACED

So here we are about to close out another year and as sure as public drunkenness, unwanted gifts and over eating are all part of the festivities indulged in to celebrate the end of twelve months of END_OF_DOCUMENT_TOKEN_TO_BE_REPLACED

Jonathan Hickman has done what many thought impossible just a few issues ago, he has flawlessly brought together all of the numerous varied plot threads introduced over the past seventeen issues that have comprised the Infinity Event END_OF_DOCUMENT_TOKEN_TO_BE_REPLACED

I was so pleasantly surprised by how much I enjoyed the first issue of this mini-series that I requested to review #2 and after reading it, boy am I sorry I did. It seems that everything I liked so much about the first issue has dissipated and what remains is an inconsistent story with awkward looking art that at times borders on amateurish try-out level pages. END_OF_DOCUMENT_TOKEN_TO_BE_REPLACED

I discovered Marvel’s What If…? series with this issue. It spawned a love of the Watcher, the most benign character in the Marvel U. These books took the main plotlines in the Marvel Universe and retold them with another, usually darker, ending. END_OF_DOCUMENT_TOKEN_TO_BE_REPLACED

Thor: The Dark World is an immensely impressive, awe-inspiring tale filled with spectacular graphics and an out of this world story that is sure to rival any other superhero movie to date. I speak these words with a great deal of bias towards Marvel Studios and why would I not? END_OF_DOCUMENT_TOKEN_TO_BE_REPLACED

Ladies and Gentleman! With great news comes great responsibility. That is exactly what is on the plate now for the likes of Marvel Television and Netflix. The two corporate giants have decided to team up for what will be four new television shows leading up to a mini-series of The Defenders. The four shows will be Daredevil, Jessica Jones, Iron Fist, and Luke Cage. END_OF_DOCUMENT_TOKEN_TO_BE_REPLACED

Having just finished the epic 10+ issue storyline featuring the past, present, and future versions of Thor battling Gorr the God Butcher, this newest issue of Thor returns him to his usual stomping grounds - Earth/Midgard. END_OF_DOCUMENT_TOKEN_TO_BE_REPLACED 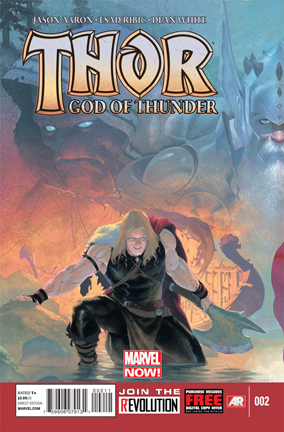