Review: Although my previous review wasn’t too hot on the return of the show after winter break, this episode returns to form exactly what I enjoy of Agents of SHIELD. Although not without a rocky start, I did feel the first bit of “The Patriot” was filled with cheesy dialogue and a shaky set-up to the inclusion of some characters in the story, such as General Talbot who returns this episode. However as the episode went along I found myself enjoying it more and more and by the end I was able to come to the conclusion that this is one of the strongest episodes of the season so far.

Leave it to me to be duped by the hive-mind of SHIELD creators yet again. Much like how I, along with everyone else, imagined that Robbie Reyes was just going to be the MCU’s first Ghost Rider and I came to terms with that – only for that to be completely subverted back in the episode The Good Samaritan, this episode reveals the origins of Director Mace and whadda ya know?

He’s not an Inhuman. 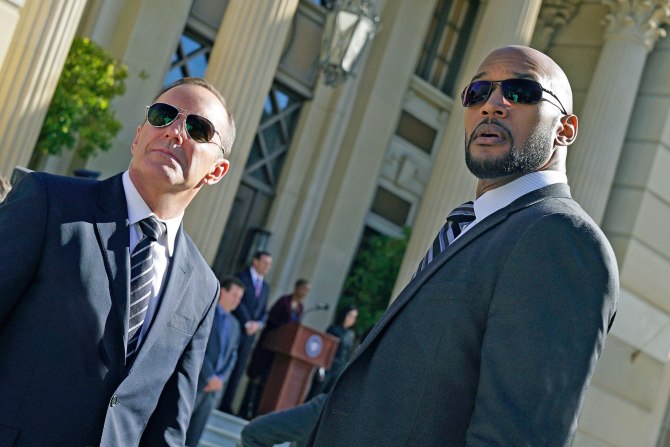 MARVEL’S AGENTS OF S.H.I.E.L.D. - “The Patriot” - Separated from their team, Coulson and Mack discover a shocking secret about Mace, leaving all of S.H.I.E.L.D. in a precarious position, on “Marvel’s Agents of S.H.I.E.L.D.,” TUESDAY, JANUARY 17 (10:00-11:00 p.m. EST), on the ABC Television Network. (ABC/Jennifer Clasen) CLARK GREGG, HENRY SIMMONS

Myself, along with most everyone else, simply accepted that he’s now an Inhuman. I mean, why not? It’s not like his powers being changed drastically alters the character anymore than it does to bring him into the modern world instead of that of the 1940s like he was in the comics. So to make Mace an Inhuman, rather than someone who was merely emulating Captain America didn’t seem like much of a stretch.

In Marvel we trust however, and the episode spends the bulk of its story laying out that Mace has actually been taking an enhanced serum for his strength, a modification of the formula Cal – Daisy’s father – took back in season 2. It’s a really nice callback to that character as and tying him in with the idea of Mae being someone who is, in fact, just someone emulating Captain America.

We also get the explanation for why he truly isn’t a hero of Vienna, however that I won’t be sharing with the class. You’ll have to go watch the episode and find out. After this episode I have a lot more respect for Mace as a character, though he lied about everything he is, we find out why he did and man this dude really shot up in the category of great characters this show has bred.

However, that’s not everything that happens this episode. There’s still the ongoing LMD threat with Radcliffe, AIDA,and LMD May the latter of which finally finds out this episode that she’s actually an LMD. That’s gonna be fun going forward. The former two have quite a bit of discussion on how they may approach trying to get the Darkhold from SHIELD. We’re still not sure why Radcliffe wants it but really it’s not much of a stretch to assume he just wants to make use of its technological knowledge. At the very least he seems to be a man trying to go to great lengths to make sure no more people get hurt along the way.

Honestly, though the episode wasn’t really focused on the LMD storyline I never really seems to miss it. Probably because right now it’s simply not that interesting. We have AIDA and May so far as the LMDs, the show is gonna need a lot more than that if it wants to craft a proper invasion which I assume is what this is all leading to. I’m sure the story will actually ramp up soon, but for now I was okay with it taking a slight backseat for needed Mace character growth.

I also wanted to touch on the opening sequence, that sees Mace publicly acknowledging Daisy’s actions when she went rogue as those of undercover SHIELD operations. Though they were a lie, I was happy to see Daisy getting public thanks and recognition. Especially after everything going on in the Avengers half of this world, it’s nice to see some of the public embracing a superhuman. That being said, the scene itself was sort of reminiscent of the original Civil War event comic that saw Peter Parker unmask to the world at large as Spider-Man. Seeing an obviously jittery Daisy essentially being outed to the public for PR gave me flashbacks to that scene. I wonder if the feeling was meant to be intentional.

This was a really solid episode. Like I mentioned earlier, it had a bumpy start with character dialogue and how it shoehorned Talbot into the episode but by the end even he held a greater purpose, and there was no cheesy dialogue to be heard from anyone. That’s good enough for me. And again, Mace, I love him now. I hope he just keep climbing the latter of greatness and sticks around past this season. SHIELD can still use him.