Amanda Conner and Jimmy Palmiotti don’t just break the fourth wall in this issue, they obliterate it! However it’s all in good fun and it goes miles in restoring some of the humor that the New 52 re-invention of Harley Quinn has leached from the sometimes silly sidekick of Mistah J. END_OF_DOCUMENT_TOKEN_TO_BE_REPLACED 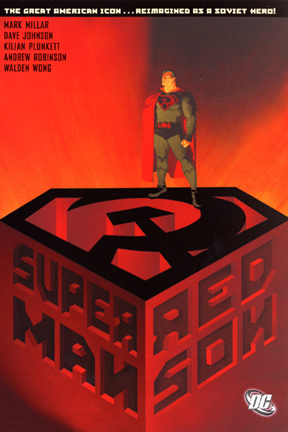 Although not originally mentioned in the comics the notion that Superman fights for “truth, justice, and the American way” has been around for quite some time and has become as iconic as his logo. In Red Son Mark Millar gives us a universe where Superman never landed on a small town in Kansas but instead lands on a collective farm in the Ukraine. He is raised to firmly believe in communism and ends up as the champion of the common worker, fighting a never ending battle for Stalin, Socialism, and the international expansion of the Warsaw Pact.

The three issue miniseries starts off in the middle of the twentieth century when Superman’s existence is revealed to the world by the Soviet Union. The existence of a superhuman throws the United States into instant panic and immediately tips the scale of the Cold War in favor of the USSR subsequently taking the focus of the war from Nuclear Weapons to superhumans. The United States hires Lex Luthor, a brilliant scientist from S.T.A.R. Labs, to bring an end to Superman. It should go as no surprise that Luthor fails in his first few attempts at destroying Superman and it becomes his lifelong obsession.

Without going into spoiler territory the story is beautifully told throughout the three issues and will have you hooked from beginning to end. The fascinating aspect of the plot is that neither Superman nor Luthor is inherently good or evil. In fact both characters seem to cross the line multiple times throughout the series. Another great thing about Red Son is the way Millar manages to incorporate characters like Brianiac, Batman, Wonder Woman, Green Lantern, and Bizarro into the confines of this new universe. The origins are similar yet different enough that they work well within the story. As far as the art goes there’s not much for me to say besides the fact that it’s gorgeous. Dave Johnson and Kilian Plunkett did an amazing job throughout the series. I was especially fond of the cover art for each of the issues.

Whether you consider yourself a Superman fan or not you owe it to yourself to check out this miniseries. It’s a great story and an interesting take on the Superman mythos and these days the TPB should run about ten dollars.