Releasing this Wednesday the 15th, “Kinski” has to be one of the most subtle and curious titles I’ve read in nearly 30 years of reading comics.  While I can see someone flipping through this and not getting much out of it, I found that hidden ‘between the lines’ was an intricate character study, an engaging story that so far is totally not what would be expected. END_OF_DOCUMENT_TOKEN_TO_BE_REPLACED 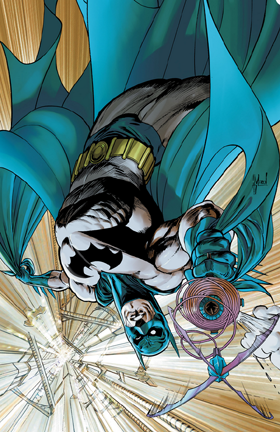 The different ‘Legends of the Dark Knight’ line of comics has always been one of my favorite Bat books to read.  As someone who is more than majorly obsessed with the Batman, I always enjoyed the cracks outside of the normal Bats continuity that it fell into, and the variation of stories they were able to cover due to this.  What makes this recent rendition of ‘Legends’ so great is that each issue showcases a number of different writers, artists, etc.  In a way, it’s much like the ‘Black and White’ series they had going awhile ago - basically short vignettes featuring Bats at different stages of his career.  This approach makes it so the series is both separate enough to make them each all the more interesting while keeping the ‘where’ and the ‘how’ out of the picture.  With these being first released online in separate weekly stories (for only .99 cents each!), this gives a creator the chance to tell all kinds of stories, and that can surely be said for this new issue #6 - the newest printed collection of these online stories.

The three distinctly different stories in this issue run the gamut from high action to deeply personal tales.  The writing provided by Jeff Parker (“Gotham Spirit”, the first in the issue), Michael Avon Oeming (artist as well as writer for the untitled 2nd story), and Rob Williams (the creepy “Look Inside”) is very much in the tone of Batman, and their individual stories are so unique from one another and yet so grounded in the Gotham streets that you never feel out of the frame of the universe, no matter where they may take you.  And it’s great.  Really great.

The first story in this trilogy - “Gotham Spirit” - has very rough and thickly drawn artwork by the awesome Gabriel Hardman, and it looks perfect in this setting.  The lines are heavy, and have a weight you can almost feel.  Batman looks like a total bruiser in Hardman’s version, and the images of anger and strength being portrayed are nearly pouring from the hero, bleeding out from the page.  It is some really awesome work, and I hope they give him another run at this character, as his style is a damn fine fit.  My main issue with this opening story is that it is the weaker of the three, overall, and pretty much all of that has to do with the writing.  What we have here is one of the most basic and overused Batman stories in his history - Bats stops a robbery, chases down the crooks, takes them out while being constantly shot at, and ends in a big cape swoop down onto the last thug.  This exact scene has been done a million times before in the various Gotham-oriented titles, and the title “Gotham Spirit” evokes a heavily overused and well explored sentiment - Batman *is* Gotham.  But, we know that, as it’s been written and written again in so many stories through the decades.  So, while I enjoyed it enough, it was the art that won me on this one.

As far as I could tell, the second story is untitled.  We come in on Bats chasing and fighting what looks to be a dragon, or something very similar.  Even Batman himself is a bit confused on this.  Their fight rapidly takes them from out of the sky and crashing down into the murky depths of the Gotham sewers, where the battle continues.  As per the usual, when Bruce has a chance to kill the beast, or at least letting it happen, he saves the creature - only to meet face to face with Killer Croc, who quickly takes the creature and cracks it’s neck into pieces.  He explains that it was created to give him “a thing of my own”, but in its failure he seems to give in to his monster side again, as he warns Batman that, though he knew he had saved the creatures life, he will kill him if they cross paths again.  It’s a poignant tale, with a nice mix of fun action and a strong emotional element.  The artwork by writer/artist Michael Avon Oeming is cool, loose and the best kind of cartoon-like comic art - as if Matt Wagner and Mike Mignola became one person and created the Batman: Animated Series.  Oeming’s artwork is really a treat in what is a truly great story with a surprisingly thoughtful ending.  This one was my favorite of the three.

“Look Inside”, with the Victorian-meets-Geoff Darrow styled artwork slightly mentioned earlier, is a strange sort of horror story.  A nameless man - basically a hire-on assassin - is hired by the Penquin to take care of some people for him.  Using his smokey and misted van - one that looks almost like an old carriage (a great connection to the art style) - he lures people to the back end, where they are shown the one thing in their life they most fear.  The crooks freeze in total fright, staring into the back of the van.  The no-name, phantom-like, corpse-white skinned man tosses them in, the doors closing on their own - just as they had opened - trapping them in, never to be seen again.  Of course, once Penguin becomes the focus of the mystery man’s plans, he turns to Batman, and the two of them devise a scheme.  During the battle that follows, Bruce is shown his worst fear, but totally in character, Batman turns it around on the man, and the story ends with a fun look into Arkham, which I found exciting as I got to see this oddly original artwork by Juan Jose Ryp in one of my favorite environments in the Batman mythos.

Issue #6 of this series was a nearly perfect read and, with the format they’re using of multiple stories each issue, it’s perfect for any Batman fan (or interested comic reader) who just wants some quick and well done stories set in Batman’s always captivating and entertaining world.