By Matt Sheean and Malachi Ward

What is the future of the Internet?  In what ways will technology impact people and how we interact with on another?   Social theorists, scientists, comedians, all of them talk about what it would be like to have the power of the Internet at your very whim, implanted into your brain.  Some see it as the next reasonable step.  What would the ramifications be?

Ancestor by Matt Sheean and Malachi Ward (Prophet) takes a look at that idea and brings it to…not its inevitable conclusion…but a conclusion nonetheless. 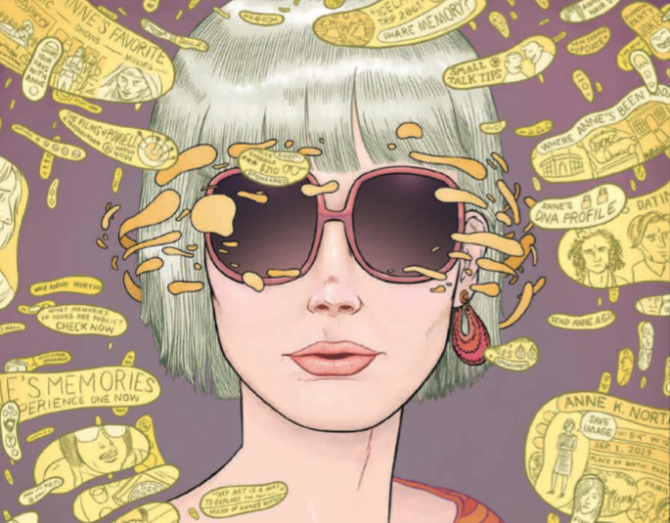 Peter is an artist plagued by anxiety.  He, like the rest of humanity, has an implant that gives him direct access to an Internet called “the Service”.  Everything online is available to him merely by thinking about it, from the profiles of people he’s just met to programs that will reduce his anxiety.  Patrick Whiteside is the creator of the Service, who is hosting a party that everyone wants an invite to.  Tom invites Peter and Jim, along with Anne Northrup, a woman Peter’s just met.  The party turns out to be…well…the Rapture in a sense, with Whiteside bringing about the next evolution of the service, and in turn the next evolution of mankind, with the introduction of his invention, the “Vera Durga”, a creature that “solves” humanity’s problems in a moment.  Thus begins the last evolution of man, and millions of years pass between the 3rd and 4th issues. 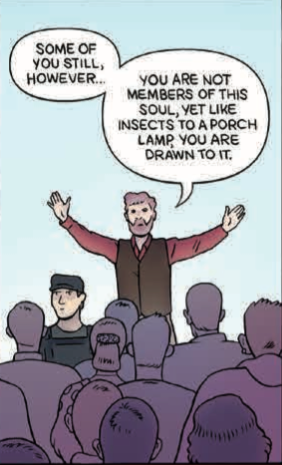 This book goes places.  There are questions probed throughout the story that could be asked of our society as well.  If we get unlimited access, does that change us?  How?  It seems to me that the questions asked in this comic were about the fundamental change to humanity.  Early on, Pete and company have very few secrets from each other, thanks to the Service.  But that’s just the tip of the proverbial iceberg.  There are several aspects of life, and the very living of it, that this reality’s people are missing out on.  The anxiety that drives many artists, and successful people in general, is eased away.  The beauty of learning about a person that fascinates you, gone.  What about the idea of chance?  Is anything out of the realm of possibility when you have unlimited access to everyone’s lives?  There is no experience that isn’t tainted by the Service.  It’s a harrowing thought when put to the current rage of social media, and the way people live their lives online.  Trolls don’t feel the need to justify themselves because the anonymity of the Internet keeps them safe.  There is a scene with Whitehead when he’s consumed with anxiety over the coming reveal, and is soothed back into superiority by a computer generated him. 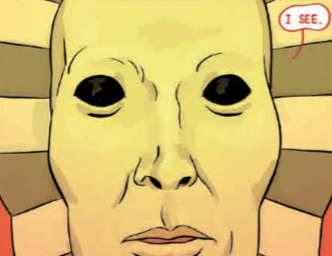 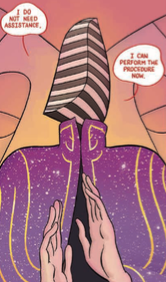 The comic is characterized by craft.  Sheean and Ward have showcased master storytelling, creating a complex idea into a comic.  Pete is the focus, Tom is the acolyte, Jim is the skeptic, Pete is the ultimate enabler.  The art is fantastic, with really imaginative character design, the realization at the end of the comic, it’s like Arthur C. Clarke decided to come back and try his hand at the funnybooks.

This is an amazing book.  I read the first issue when it came out, and I feel like it works much better as a trade, read all in a sitting, when you can’t escape and soon find that you don’t want to.  Sheean and Ward have made me think about things, have made me look at the way I use social media myself, and in this comic have convinced any who read it that perhaps it’s better to put the phone down and talk to a real person, but only after you’ve read my review.  What better result from a piece of art?