Story and Art by Kousuke Fujishima

Summary: Toppu Uno loves watching his neighbor, best friend, and crush Myne-chan race the tracks in professional Motorcycle Racing. He’s also incredibly smart and can easily time her racing without the use of a timer and can memorize and accurately re-create anything he sees. One day after Myne-chan eggs him on to try racing for himself Toppu begins his own journey into the world of professional Motorcycle Racing.

Review: From the creator of Oh! My Goddess comes a new series about professional Motorcycle Racing with the intent of accurately portraying the sport and bringing the excitement and thrill of the races to the pages of manga. It’s being released digitally by Kodansha Comics in the U.S. and there are currently 6 chapters available for purchase. Toppu GP runs monthly.

I first found out about this manga around the time the third chapter was being released. It was around the time both me and a friend of mine were searching for a good and proper sports manga featuring motorcycles and sure enough the timing of this series’ premiere along with what we were craving seemed too good to ignore.

However after reading the chapters that were out I felt there simply wasn’t enough content in them to warrant proper discussion and so I waited for at least 6 chapters to come out in hopes that I could finally fill my writing space and be able to give a decently coherent discussion.

It’s telling then that after 6 chapters and around four months of waiting I still feel as if I’ll be stretching my words just to talk about this danged thing. Honestly I probably won’t be continuing this manga after this review.

The series opens up with a shot of the future with Toppu Uno entering the MotoGP and being one of the favorites to win. He looks up to the sky and hopes that his big sister is watching him from above. It’s a touching moment to kick the series off and we’re immediately taken back to 7 years prior to just before Toppu himself became a motorcycle racer.

Like the summary states he loves to watch his “big sister,” and crush Myne-chan as she races across the track and the two are really good friends. By how much older she is I’m not sure but since she seems to openly flirt with him – perhaps playfully, I can’t tell how serious she is around him – the age gap can’t be that much.

We don’t spend too much time on her races as Myne-chan turns to teaching Toppu how to race. It should be a pretty great bonding experience for the two, racing the track together as she teaches him on the fly, but instead he’s sent out on his own and immediately understands what to do. Which is when we learn that he can accurately re-create anything he sees. 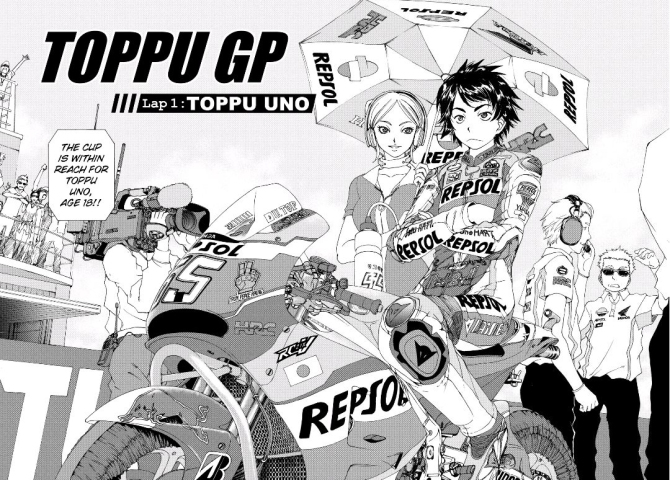 Because of course he can.

I’m not much for super smart main characters that are humanly distanced from the other characters and especially the reader by being too good for their own good. I want to see the hero fail and succeed by their own trial and error – not someone who’s perfect at literally everything from the get go.

Thankfully for as smart as he is Toppu can at least emote his feelings and isn’t a total robot. And he does fail a few times but those failings aren’t caused by him so at the end of the day he doesn’t really learn anything new about himself or the race. And this continues throughout all 6 chapters with each chapter giving him some new minuscule thing to get past or risk having an accident on the track.

Unfortunately because of how easy it is for him to learn the “lessons” that are put before him not once does it ever feel like an accident is plausible to happen and so all excitement is lost on me to root for him. Which is a damn shame because of all the beautiful panels spent every chapter just on the spectacle of the races themselves that energy of the race should easily jump off the page. And still it just falls flat for me anytime I read these chapters.

By chapter 6 not much has changed for out characters, they’re still racing each chapter, Toppu is given a new very slight obstacle to deal with in which he gets over rather quickly and that’s literally. We don’t really ever see the small cast of main characters not at the tracks and that doesn’t call for a lot of character growth or interaction in new situations.

I want to be excited by the race but instead I’m just bored to tears because that’s literally all they’re doing. If Toppu wasn’t so perfect I would be more interested but it’s because of his lack of flaws and the lack of multiple settings that gives this manga so much of its own flaws. If that isn’t irony at its finest then I don’t know what is.

The art is gorgeous however. Though I haven’t read a lot of Fujishima’s other works I have always been aware of his art and I love his art. Toppu GP may not be heavy on story but it is gorgeous to look at and the motorcycle and the portrayal of the sport are pretty damn accurate and detailed. The character designs are pretty and nicely polished; the racing is highly kinetic although not incredibly energized for the reader.

At this time I wont be continuing Toppu GP. However when this series gets 6 more chapters released I may or may not return to it to see if it gets any better. Until then however, my personal opinion is that this manga would work far better as an anime. Perhaps someday we’ll even get one. That for sure would make me return in a heartbeat.