Review: It’s just the way with all of these action series. Stall for time. Stall for time. And never truly kill anyone. There was a time when Isayama allowed the body count to rise with every passing chapter in his story. But as the stakes have grown higher and the main force has been whittled down to the main characters it seems it’s been harder for him to let any of them go.

Now that could change within time but for now I have to just groan and roll my eyes because of COURSE Reiner has another Titan ability that truly defies all sense of logic and has allowed him to survive getting the top half of his skull blown off.

The new ability is one we were never told about before leaving it quite convenient to learn that Titan users can allow their consciousness slip into the very nervous system of their bodies allowing them to escape true death and eventually regrow themselves back. But the nervous system is attached to your brain, which Reiner is lacking, and wouldn’t it make more sense that by slicing the nape of a Titan’s neck you’re then severing the nape of a human neck disconnecting the brains to the nervous system and thus completing true death for those who had originally escaped it? Or am I just over thinking things again? 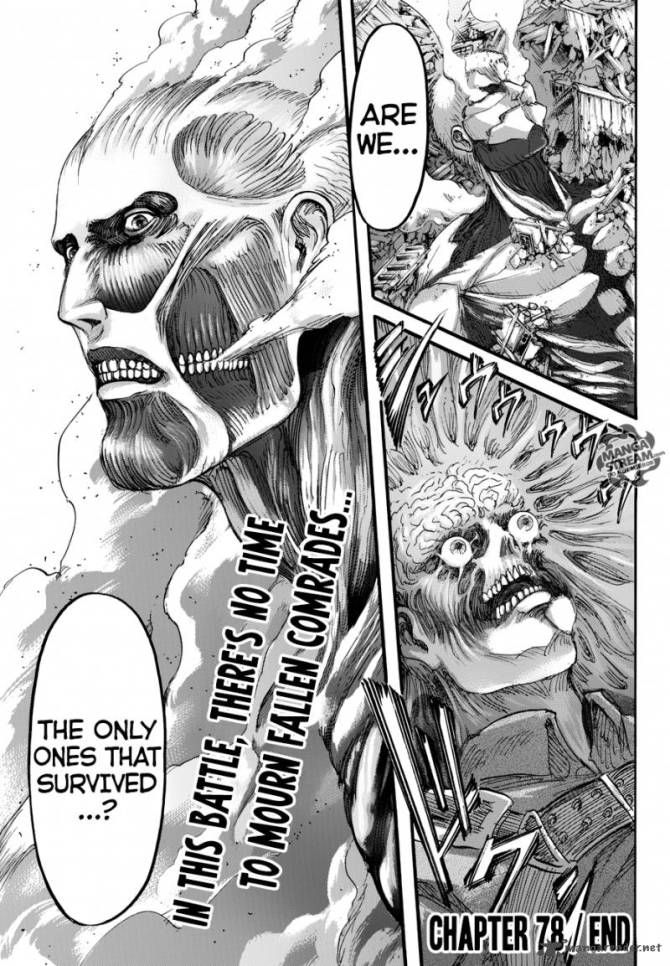 Last chapter ended with Bertholdt being launched into the fight to crash upon our heroes as the Colossal Titan but instead he decides to to forgo that and risk getting torn down by his fellow man whilst in human flesh. He does it to go make sure Reiner is okay, but I personally wish he would have gone straight into Titan mode instead of lingering throughout the chapter as a human.

I personally just don’t find Bertholt interesting as a character and finding out he is the Colossal Titan really soured that mysterious creature for me. Nor do I feel he had much anything of interest to say this time around, he usually doesn’t. Armin attempts to stall for time which is basically Isayama doing the same thing. The only thing to come out of this chapter to make me perk my ears up is that Hanji MIGHT be dead after the explosion from the Colossal Titan’s transformation but after the absurdity of how Reiner survived his death I’m sure Hanji will find a way as well. I mean, she’s already faced death before and came out on top. Why not again?