Summary: Mirai is fed up with life. His graduation from Junior High is an empty husk of an event and he doesn’t wish to return home to his ever-abusive step-family. After attempting suicide he’s saved by the angel Nasse who gives him the opportunity to enter into a contract with her to become the next candidate for God. With Cupid’s Arrows and an angel’s wings bestowed upon Mirai he must now use his powers to become the last candidate standing in a tournament to see who will become the next God.

Review: Platinum End is a series that I was really looking forward to when it was first announced. I’m a HUGE fan of Tsugumi Ohba and Takeshi Obata. Both as individual creators and as collaborators. Together they brought us the ever-popular Death Note, my personal favorite manga, and Bakuman. which is also in my top 5 favorite manga of all time list.

Unfortunately 4 chapters in and I just continue to get more and more frustrated with this read. I don’t want to sit here and say their 3rd time out is a stinkfest of a story but the truth of the matter is it’s just not that good. The concept is interesting: God has decided his time is over and someone else from the Earth must take over as the new God. So he dispatches 13 angels of varying ranks and power levels to seek out 13 candidates on Earth who should become the next God. All 13 are chosen in Japan because of it’s high suicide rate and each candidate must be on the brink of killing themselves from despair when they are chosen. Someone who has nothing left to live for in this world. That is the ideal candidate for God.

The execution is bordering on the offensive side however and I could honestly see this series offending those who have found themselves at this point in their lives and yet survived their horrors. Or are still dealing with them. Because Mirai has it tough, he finds out his step-family had his parents murdered for the money they would leave behind and then beat Mirai senseless the rest of his life like a rag doll.

But unlike so many other people who find themselves in despairing situations he is able to calmly and rationally think through everything and make every decision with a sound mind. Soon after he gets his arrows and wings, which we’ll discuss momentarily, he uses them to get back at his step-family and single-handedly sets up a pretty little life for himself. Things he didn’t have before he can now do and starts to quickly change him into someone who is willing to find happiness in life again.

Through the quickness of the events and the preachings of both Mirai and Nasse’s dialogues the whole development comes off as sudden, unnatural, and straight up unlike what would probably actually happen to a person who is going through these sudden changes after trying to kill himself. By chapter 4 it’s almost as if Mirai has “sullen and depressive” moments because Ohba wants him to not because he’s gone through actual growth and change.

The story is also not very well pace or plotted out. And has a hint of anti-Death Note to it as well. Instead of a God of Death hovering around him constantly, Mirai has an Angel of Purity and Innocence. And she basically serves the same exact purpose as Ryuk. To guide Mirai through these trials and spectate the whole thing. Instead of Death Note’s, these characters have arrows and wings.

In the span of 4 chapters we go through Mirai attempting to kill himself, becoming a God candidate, getting back at his step-family, starting a new life for himself, meeting other God candidates one of whom is the girl he’s in love with. Go figure. And they’ve formed an alliance. Developed and enemy who is using his powers to pose as a superhero for the general public while drawing out other candidates for the slaughter. And is now going to confront this enemy.

That’s a lot for 4 chapters. This series is really rushed and it makes that clear most prominently when one of the major cliffhangers happens to be the girl of his dreams hitting him with one of Cupid’s Arrows. Which allows the user to make their prey fall in love with them for 33 days. The wings allow for flight faster than the human eye can see. The chapter following this could have spent it’s time really developing their relationships and diving into what would actually happen if someone was hit by an arrow by the person they already love.

We get a bit of that but really the whole chapter is them discussing how best to deal with Metropoliman and him calling out God candidates. And then near the end of the chapter bam! 33 days have passed, and the girl of his dreams tells him that being with him all this time has shown her she should try to find something to happy to live for as well. But where did that time go?! What happened in those 33 days?! It’s really terrible.

So far we haven’t met many of the God candidates, but their powers will range between having just the wings, or just the arrows, or both depending on what level ranked angel picked you for their candidate. Mirai got lucky with a special ranked angel in Nasse so he got both powers. Metropoliman has both powers. And so far the only other 2 candidates we’ve met thus far only had Cupid’s arrows. 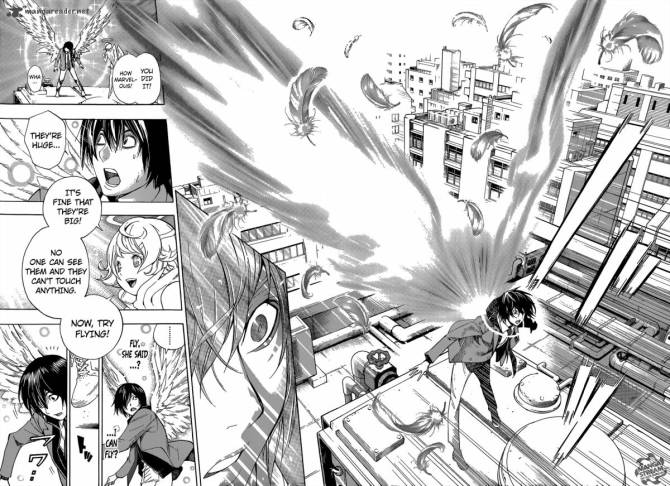 One very interesting thing about this series however is that God flat out doesn’t care what kind of person you are to take over his position. Quite honestly. You have to be on the verge of killing yourself and that’s your only requirement. Otherwise God is conducting a tournament to have 12 people slaughtered and 1 person standing and just based off of the actions of Metropoliman alone he is not fit to become God. He’s too evil. And yet he is a chosen candidate so it doesn’t matter as long as he wins.

The best part about this series right now is Obata’s beautiful artwork. I’ve followed him as an artist through Death Note, Hikaru no Go, Ral-Grad, Bakuman. and beyond. While I don’t think the actual manga interior work is his best to date the promotional art, poster work and cover art he’s done for this series is beyond a doubt some of his best. It all really gets you so invested and interested in the story and gives a sense of pure wonder about what’s inside.

I really enjoy his designs for the angels themselves, they look quite otherworldly and pure. Even though some of them are not. And honestly if there is no Nasse x Ryuk fan art out there then someone needs to fix that right away.

I don’t think Ohba has a proper grasp on the human condition in this series like he has excelled at in the past with Death Note and I’m not sure why that is. It’s not like he hasn’t written this kind of story before. Platinum End is pretty much anti-Death Note with many similarities. It could get good, I want to have hope that it will get good soon. Ohba IS a competent writer. But 4 chapters in and so much having already happened I’m just not entirely sure yet.

I will be following this series because I am a fan of these two creators so expect chapter reviews in the future. It’s a monthly series like Monster Musume and Attack on Titan. I want to believe in Ohba and Obata’s storytelling powers… I want to… I want… I… just don’t know.

Final Score: 1 Platinum Angel out of 5