The Alien outbreak on the human Mars base reaches its thrilling finale in Aliens / Vampirella #6 as Sarah and the crew of the supply ship are left reeling from what they’ve just seen unfold, while Vampirella and the resurrected Nosferatu confront the misinformed military to unite with them against the Aliens. In their frantic battle to escape from the Xenomorphs, the fate of everyone remaining on Mars - living and undead - rests on a knife’s edge as Vampirella confronts the savage fury of the Queen Alien / Vampire Hybrid.

From the moment you set eyes on the fantastic cover by Gabriel Hardman and Jordan Boyd, you’ll find yourself instantly transfixed by the ingenious premise of having two horror icons clashing in one book like this. Aliens / Vampirella #6 brings this exciting six part series from Dynamite, by writer Corinna Bechko, with art by Javier Garcia-Miranda, and colors by In LIGHT Studios, to a close with an action-packed, violent, and bloody finale that is sure to be a big hit with fans of Vampirella and the Aliens franchise!

Lars fate continues to resonate powerfully, as does the impact of last issue tumultuous revelations where we discovered more about the Nosferatu, their rituals and colonization of Mars, along with how things went wrong, and as this issue begins writer Corinna Bechko continues to build the action and suspense as events race towards an epic showdown between Vampirella and the Alien Queen / Vampire Hybrid herself!

Monitoring the situation from the Supply Ship, the crew quickly realize what Sarah saw wasn’t a vampire. Even after the shock of everything that’s happened, Sarah is determined that she wont abandon Vampirella or the others on Mars, despite the quarantine that’s now in place because of the Aliens, and gets ready to take decisive action! Meanwhile, Vampirella and the Nosferatu must convince the military forces surrounding them that they are not the enemy, but things quickly spiral out of control when the Aliens strike. The Xenomorph onslaught which follows unfolds with lightening speed, the Aliens begin attacking on all fronts, and soon Vampirella, the Nosferatu, and the survivors face a desperate race against time to reach a short range shuttle and escape from the planet - but something nasty in the green house has other ideas.

There is an incredible level of detail in the art by Javier Garcia-Miranda for this issue. Each page is packed with strong visuals, and the concisely structured panel layouts allow the action to unfold at an incredibly brisk pace. The tense close-up encounters with the Aliens is brilliantly juxtaposed with the various uncanny angels down long, shadowy corridors, making the characters frantic dash for safety seem all the more nail biting. Javier Garcia-Miranda ensures the Xenomorphs look as menacing as ever, treating us to a barrage of Alien carnage: we’ve the obligatory sight of a drooling Alien with its inner jaws smashing though a helpless victims head, gut wrenching impaling, the hybrid Alien Queen in her lair, slimy face huggers galore, and enough acid blood splattering around to make your eyes water. This is all cracking stuff, Javier Garcia-Miranda’s work on this issue is outstanding, particularly the epic showdown with the hybrid Alien Queen, Vampirella looks stunning throughout, and the subtle use of color and shade by In LIGHT Studios accentuates every moment as the issue races towards its conclusion. 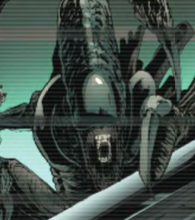 The inevitable face-off between Vampirella and the Alien Queen / Vampire Hybrid is undoubtedly the highlight of this issue. While it hinges on the familiar tried and tested way of dealing with the Alien threat, the finale to this series does manage to include an unexpected surprise, one that will ultimately change the course of the final battle. It does all end a little abruptly though, but that’s only a minor quibble, for what is otherwise an excellent issue.

Aliens / Vampirella #6 rounds off this six-part series from Dynamite in fine style. Corinna Bechko has crafted a well paced, thrilling, and often gruesome storyline that has finally brought these two horror icons together at last, and with Javier Garcia-Miranda’s superb art Vampirella and the Xenomorphs make for a visually stunning combination. Indeed, the horror and Sci-Fi concepts of Vampirella and the Aliens franchise works so well together, it’s a wonder nobody ever though of doing it before! So be sure to check out Aliens / Vampirella #6 for the bug hunt of the year and the biggest smack down with an Alien Queen you’ve ever seen!