The new Back to the Future comic was not what I expected. Actually, I don’t know what I expected, really. I love the movies so much, as much as any true fan of BTTF. As soon as I saw this book, I jumped at the chance to read and review it. Just seeing the logo on a comic cover was enough to get me hyped. So I dove in with high expectations of… something. Really, I didn’t know if this was a graphic retelling, or a sequel, prequel or what? 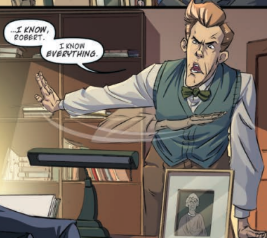 So that’s just it, it’s not any of those things. It’s an anthology series depicting stories from in and around the existing framework of BTTF. In other words, short stories about the characters that fit in with the continuity of the movies. As soon as I realized that I thought, huh, okay, so this first story is about how Marty met Doc. I guess I wonder how that happened. This other one is about Doc as a young science teacher at Caltech. Interesting.

That’s what it is. It’s like “Tales from BTTF”. In fact, the subtitle of the series is “Untold Tales and Alternate Timelines.” I think I’m cool with that as a concept, because telling a story in comics that continues the movie plot just might not work as well. This is it’s own thing. In fact, in an article in the end of the issue, Bob Gale (co-writer/co-creator of all three movies with director Robert Zemeckis) explains the thinking behind making this series about the stories in-between and around the movies. It’s very sound thinking, and he talks about the weaknesses (and immense storytelling power) of using time travel as a storytelling device, and why he thought it wouldn’t work here. He makes the case that with time travel you can do (and undo) anything in the plot that you want to, and so there are no boundaries and no disciplines that you have to adhere to in terms of story and reverence to the original material. Gale talks about how in the movies, they made the mechanics of time travel wonky and hard to achieve on purpose, so that they couldn’t use the time machine as a crutch to fix the problem. Just think, Marty was stranded in both 1955 and 1885 with the delorean in need of repair. in 2015, 1985A and revisiting 1955, the delorean was in working condition, but they couldn’t go anywhere until they had the almanac, and they couldn’t interact with their past selves just incase they would accidentally unravel the space time continuum. So the movies had plenty of discipline to work within. Just that one page article in the back that sums up the thinking behind the new series was enough to get me to put faith in this series as a whole. He is one of the creators and writer of the original source material after all.

What about the content of this issue? Well… It was good. It wasn’t great, but pretty solid. I would return again for more, especially given that it’s an anthology. Anthologies have a kind of hit-or-miss effect to them, and that is evident here. Both stories are good, and both feature good writing and art, with plenty of reverence to the source material and little nods to different aspects of the movies. It’s just, going in with all the expectation that the movies have built up for you, you might expect the same rollercoaster ride as watching any of the 3 movies. Given that ruler, this book doesn’t measure up. It really reminds me of Batman ‘66, of which I am a fan. It’s taking an existing thing that has a very distinct personality in another medium, and building a comic series on the outskirts of that original thing.

Put your reverence for the movies on the shelf and enjoy this as a well done comic about interesting, well thought out characters, because that’s what it is. In a few places, I felt like “Doc wouldn’t say that” or “Marty wouldn’t do that”, but, who am I to make that claim? In the end, these characters are as malleable as any other character in any other series. It’s just that those movies made such an imprint on my mind (and likely yours too if you are reading this) that any slight deviation feels wrong. Another thing I noticed is that it feels like they are just starting small, with plenty of room to go. For instance, absent from this first issue are: Biff, Jennifer, George and Lorraine, and even the delorean itself. In fact, no time travel takes place at all. They are at the very beginning of a long and promising road. And where they’re going, they don’t need roads.

BJ DuVall is a novice comic creator, and nerd. He likes to spout opinions, whether people like to listen or not. Usually not. http://www.bjduvall.com