Jonathan Hickman blew by my radar. That’s no excuse, I know it. I could blame it on any number of things. The lack of a comic shop nearby, my own stupidity…let’s not get into that. The blame lies at my door.

…Goddang I love the way Jonathan Hickman writes. I just read the recently released East Of West The Apocalypse: Year One, and it was fifteen issues of glorious madness.

Why you ask? How could fifteen issues of a comic be so fantastically wonderful in all of this gory, socio-political and mythological craziness? Hickman of course.

To summarize…this is an alternate timeline story in which the United States is fractured early in the twentieth century to form five distinct and separate zones within the continent.   They are the Union, The Kingdom, The Republic of Texas, the Endless Nation, and the People’s Republic of America. Each of these zones is particular in the way they are represented. The Union is as close to what we would see as our capitalist government. The Kingdom is a sort of New Orleans expansion, the Endless Nation is a super-advanced Native American culture, and the PRA is a communistic society on the west coast. These five nations have brokered an uneasy peace for a hundred years.

The Horsemen of the Apocalypse have just been reborn. Not all four though. Here’s the twist. Death never left the last time. He found love in the daughter of Mao, the leader of the PRA, and they had a child. That child was seen as an abomination by the five nations and taken, presumably killed. Xiaolin, Mao’s daughter, was sent into exile. Death is riding in search of her with two companions, Wolf and Crow. They leave a trail of devastation in their wake. Nothing can stand up to them.

In the meantime the three horsemen, reborn as children, albeit monochromatically armored children, are in search of their fourth. They are the opposing force to Death, and equally deadly.

As if Death wasn’t pissed off enough already, halfway through he finds out his son is alive and in captivity somewhere. Let the carnage begin.

Now to the difficult part, the analysis of this tome. I once heard this book described as “Hickman just doing whatever he wants…putting whatever the hell he wants to…you want Colonel Sanders in there? Done. Judge Dredd? Done.” I feel that’s accurate, but the hitch in that theory is this…he makes it work. I feel like I was catching references and little hints to all kinds of other popular culture. The obvious western and political thriller, but also Dune, Judge Dredd, Akira, Game of Thrones…there are little pieces of everything in here, and Hickman is able to blend them all together so that they fit in a seamless story. 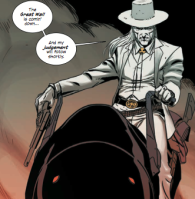 I think the genius of this book is only realized when reading it long form like this. I have some of the single issues, perhaps 12 of the first fifteen. I read the first five in single-issue style. As I worked through them I could tell it was something I dug, there was some thread that I was picking up on that I liked, but I couldn’t tell what it was. I’m not a hundred percent sure now what it is, but I feel like I understand the story more completely as I’ve read through fifteen straight. (Of course, by no means could I describe it in detail that will take much deeper thought and re-reading.) The Game of Thrones reference comes from a comparison I made in my head. Both George R.R. Martin and Jonathan Hickman bring in seemingly minor characters and through sheer force of will and writerly greatness, bring those characters in to the spotlight and make you care about what their part is in the story. At the same time, he’s made us feel empathy for Death of all people. But I guess the original reason why I picked up the book is still a major reason why I love it. 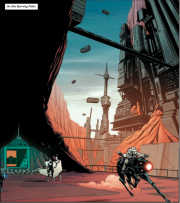 I’m sure this is a combination of Image’s marketing department and the Hickman/Dragotta/Martin creative team, but the covers of these books are striking on the shelf. Mono or duo chromatic covers with generally white borders and heavy black type make for a bold shelf book.

Dragotta’s style is one that I’ve come to enjoy immensely. His character design and the flow of his paneling are both amazing. The combination of old west and sci-fi works perfectly well, and after a few pages doesn’t seem at all strange. Dragotta’s figures are long and lean and mean. These are the Clint Eastwood of drawings. But don’t think that he’s cornered into one area or classification. Dragotta seems just as comfortable drawing the Akira-esque mutations that take place in the book with just as much skill and terrifying detail. 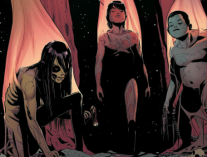 The choices made by colorist Frank Martin are interesting as well. When you look at the Four Horsemen, each one is a different color, red, blue, greenish/yellow, and white. Because of those color distinctions it’s easy to quickly tell which of the characters are on the page and how those characters are interacting with each other. At the same time, making Death the literal pale rider is a beautiful choice, and he jumps right off the page.

Don’t forget that this is a collection, fifteen issues and numerous extras tacked on to the end. There are 500 pages of East of West insanity as well as test pages and scripts and all kinds of cover art.

I never read any of Jonathan Hickman’s previous work. But because of this book I will always be ready to pick up something that he’s penned. The artwork of Nick Dragotta and Frank Martin make this story, in my opinion, the best looking book on the market. Hickman and Co. have created an amazing comic book, and as long as they continue to throw in whatever the hell they want, I’ll keep reading it, because it all works.