Written and Illustrated by Jeff McComsey

I didn’t know what Mother Russia was when I chose to review it. I saw the Drew Moss cover art and thought it looked cool. (Despite what Levar Burton and every librarian ever have said to me, I still choose books by their covers.)

Jeff McComsey has made a name for himself in zombie comics with his lauded FUBAR series, in which he takes the zombie phenomenon into history. As it turns out, Mother Russia is another in that series, and it drops hoards of the undead on Stalingrad during the long winter of 1943.

To set the historical scene, we have a German army that is ill equipped and far from home, and a Russian army who is fighting to save their homeland from an invasion far into their borders. Any writer would tell you that this is already a tension-filled and character testing environment. McComsey goes the further step and makes each and every soldier killed (not the head shot ones of course) a carrier of zombism. Now you’ve tens of thousands of walking corpses, and only a handful of starved and failing soldiers to fight against them.

McComsey focuses on one person in particular, nicknamed “Mother Russia” by the invading Germans; Svetlana Gorshkov is a Russian sniper. She’s found the perfect place to wait out the wandering hoards, atop a high tower only reachable by a rope. It’s stocked with food and ammunition, and she spends her days quietly reading and popping the occasional zombie in the melon from 500 meters away.

Until the day in question. The day our story really starts. When Mother Russia spies something through her scope that causes her to throw caution to the wind, to leap from her tower and blast through the hoard.   A child.

This volume follows Svetlana through maybe two days, during which she inherits a family and trusts old enemies, and through which the unending zombie menace is constant and always deadly.

McComsey is really one of the best at this, going by just this one book. He builds confidence in Svetlana with precision, showing how good she really is. Little clues like gauging distances in precise meters, and always being on guard, even when she has no reason to be, show that she could be the one Russian that makes it out of Stalingrad alive.  At the same time he shows how bleak the situation is for the few survivors involved. 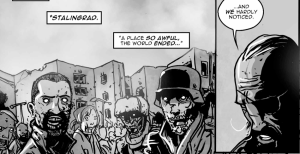 His art style is great, black and white with grey scale shading. It helps to establish the period piece feel to this book, as well as not allowing us to get lost in the blood and gore that could splash all over the page. The images are clearer for their lack of color, and his style really shine through.

There are additions to this volume as well. Chuck Dixon pens a tale near the end, and McComsey writes other that build back-story into the Mother Russia mythos with three different artists trying their hand at the book. Each is different and looks great amidst the others. Steve Willhites’ style is a little cleaner than McComsey’s, and the Giles Crawford story looks more like oil paint.

Mother Russia brings zombies to Stalingrad and enemies together, while being a story about the will to survive hardship after long hardship. At the same time, it’s a kick ass story about a tough woman, willing to mother a child with one hand and pull the trigger with the other. It’s a beautiful balance of history and fiction. Check out Previews this month for ordering information, or go to Alterna’s website.

At the beginning I thought…another zombie book. After the first issue I was glad it was a trade so I didn’t have to wait to read the next.