Just when you thought it was safe to trust your government, when the line of baloney the military industrial complex was feeding you was the only baloney on the market, Plagued #2 has returned to dissolve those beliefs. Ok, not your government or military blah de blah, it’s a much comic bookier one. 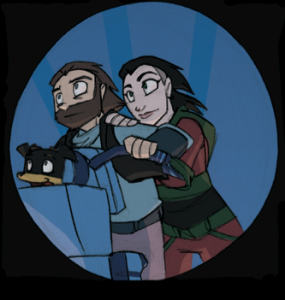 Plagued #2 from BHP Comics. The first issue set the tone and built the world. It’s a sci-fi story with a few more mystical themes. Mackie is a reformed bounty hunter whose former job was based around the capture and incarceration of witches, of which Miranda is one. He and Dex, a talking dog, met Miranda in issue one and she opened their eyes to the dark side of the government and the lies perpetrated by it. A virus wiped out a good portion of the population, and Reneco provided the only “cure”. The company went on to become not only the most powerful, but in this world, the only company. Now Mackie knows that the disease, or at least the cure, were falsehoods, and has agreed to help Miranda in her quest to school the populace and destroy Reneco. Did I mention Miranda is a witch? Pertinent information, that.

The story, though it may seem far-fetched, draws on what has become an almost universal distrust of governments and the underlying motives and influences behind governmental decisions. In an age where everyone’s dirty laundry is aired in public forum, we seem to be at a point where no one trusts anyone. This story takes the long view of what could happen down the road with a huge government lie and the silent, behind-doors handshakes that happen between corporations and politicians.

Tanya Roberts’ art is great for this story. It is a distinctly cartoony style. Because of the snarky back-and-forth interactions between Mackie and Miranda, the melding of the dialogue and the art style make this feel familiar to me. Like if the creators of Animaniacs were tasked with making an all-ages sci-fi cartoon for airing after school. When Roberts shows “the magic” happening, she uses a great blend of solid colors and these little squiggles that look like a colored pencil test on the paper. It’s a jarring effect, to see the lack of solidity, but artistically it works because it helps to make Miranda a person apart in the overall story. She’s something special, something different in this world. There’s something slightly sketchy about how the art. It’s not a bad thing; in fact I really like it in this case. Some extra lines here and there, it makes it feel like a comic still without looking like a cleaned up cartoon.

In Issue two we see Mackie and Miranda doing what they set out to do in issue one, the freeing of cities, and the complications that arise when a man from Mackie’s’ past arrives. Gary Chudleigh and Tanya Roberts work on this book is fantastic, a step outside the norm, and worth checking out. Plagued #2 is available from BHP Comics.

NOTE: BHP Comics does NOT ship to the United States.