Greetings once again True Believers, it’s time to check in with the masterminds at the House of Ideas for another installment of SMU. I will be your Secret Wars correspondent as we journey through the War Zones of Battleworld all the way until the Last Days and unlike Brian Williams I will be reporting facts as they are uncovered. So without further dalliance let us hop into the flying ’62 red Corvette, we so lovingly refer to as Lola (I grabbed the keys from Coulson’s jacket pocket) and begin our journey into the strange, uncanny, amazing world of the post 616, new Marvel Universe.

This installment seems to have something of a villainous slant as we will be taking a look at new series featuring some of Marvel’s biggest and baddest; Red Skull, Hydra and Apocalypse all will be getting the Secret Wars treatment. Let’s start with that old nefarious Nazi, Red Skull. Written by Joshua Williamson with art by Luca Pizzari this title will hit the racks in July under the Battleworld banner, however this project is reported to focus more on the Red Skull’s villainous legacy than the fascist foe himself. This three-issue mini-series is set in a time after the Skull has been exiled into the harsh environment of Battleworld; believed to be dead by many, rumors of Red Skull’s demise seem to have been greatly exaggerated; amidst talk of his return his followers resolve has intensified and re-ignited the flame of resistance against the leadership of Battleworld. The narrative is built upon the exploits of an infamous team including: Magneto, Lady Deathstrike, Winter Soldier and Electro and their arduous task of finding Red Skull’s corpse thus proving the vile villain is actually dead. 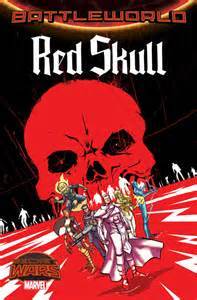 Williamson explained this unlikely ensemble of less than heroic characters in an interview with Newsarama as, “Essentially it’s a team of villains…and past villains with nothing left to lose, going over the Shield is a death sentence. This team was chosen because the mission has to be off the books. No one can know that Red Skull could actually be alive. This team could keep it quiet…if they survive. The Red Skull’s legend needs to be buried…and this is the best team to do it, if you need to go kill a villain…who better than a bunch of villains?” As far as which universe this particular Red Skull calls home, Williamson would not reveal in great detail, only saying, “The Red Skull’s identity is part of the mystery of the book, so I can’t say just yet. He’s one of the most evil bastards in the Marvel Universe, still someone to hate, a master manipulator with a black heart.” Sounds like this band of not-so-merry men (and women) have their work cut out for them; this promises to be an exciting entry in the annals of Battleworld. 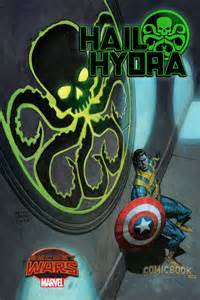 Next up is a Warzones title that I am definitely anticipating big things from; Hail Hydra comes to us by way of the brilliant mind of Rick Remender with art by his Winter Soldier: The Bitter March collaborator Roland Boschi and will be available in July. Remender has set this series in a Battleworld domain where Hydra has ruled America for hundreds of years. Steve Rogers adopted son from his Dimension Z saga Ian Zola, now known as Nomad is the central protagonist of this narrative; we see him do battle with familiar Marvel heroes such as Venom and The Avengers, however in this domain his former allies are now agents of Hydra.

Remender explained the concept of his story to Comicbook.com, “We’ve always seen Hydra’s attempts at world domination foiled, so this story gives us an opportunity to dig into a world where Hydra was not only never stopped but had insinuated itself into the American system and took over the country hundreds of years ago. In this world, we’ll see a New York City where Hydra was like the Freemasons of history. Hydra is now the American Dream.”

Of his choice to use Ian Zola as the central character over the current Cap, Sam Wilson and even Steve Rogers, Remender said, “What’s cool about Ian is that he drifted from one dimension to the next in the main Captain America series and now he’s drifting into this dimension. It kind of gives meaning to the name “Nomad” because he really is drifting from one place to another. That’s what made him the right choice for the story.”

Remender has done such a great job of carrying the Captain America mythology to another generation of readers and I cannot wait to see what he does with these characters in the era of Secret Wars and this new Marvel Universe. 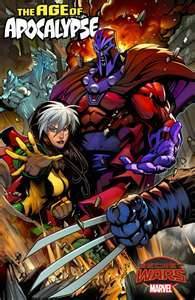 The final title we are going to look at in this installment of SMU is Age of Apocalypse; a Warzones series written by the prolific and talented Fabian Nicieza with art by the wildly imaginative Gerardo Sandoval. I’m quite sure most True Believers will recognize Nicieza as the writer of the original Age of Apocalypse, however this time around all of the major characters are still alive, allowing Nicieza and Sandoval access to the full cast of this mutant epic. The writer told IGN, “In many ways, the world I’m writing is very different from the original, but in other ways it’s exactly the same. I feel like I’m getting a chance to have my cake and eat it too, regarding the positives of the original story world while still doing something very new.” These guys are certainly no strangers to the extensive cast of characters composing the world of the X-Men and their extended family of mutant heroes and villains, so I have complete faith in them to deliver a senses shattering Secret Wars series.

Well that is going to bring us to the end of this information filled installment of State of the Marvel Universe with me B&B’s own Agent M. Please be sure to stop in next time when we will be examining much more of the magnificent Marvel mayhem known as Secret Wars. As for me, I have to get Lola back before Coulson notices his keys are gone. Until next time True Believers, Excelsior!