Last year’s “The Trial of Jean Grey” marked the first time these two teams were paired up for a major crossover. In the time since that first event The Guardians of the Galaxy have become a bona fide part of the pop culture landscape, thanks mainly due to a huge blockbuster film that proved just how exciting and fun this group of cosmic misfits could be. Marvel has never been known for failing to capitalize on momentum hence the slew of GotG books on the racks these days; both Rocket and Star Lord have eponymous series with Gamora to follow as well as a Guardians team-up book. The really astounding thing about all these new series is that they are all entertaining and boast some of the biggest names in the industry including; Skottie Young, Sam Humphries and the prolific Brian Michael Bendis. So it stands to reason that the massive Black Vortex crossover event would face some pretty high expectations and for the most part the opening chapter lives up to them, however it is not without a few mis-steps.

First off writer Sam Humphries captures the tonal quality that has come to define a Guardians series; its heavy on the humor with lots of Jack Kirby inspired settings and plenty of big action sequences think Star Wars with an extra helping of pulp sci-fi and you are getting warm. Where Humphries stumbles is in getting bogged down with needless recounting of X-Men and Guardians history he tends to hinder plot progression in favor of bringing us up to speed with Peter and Kitty’s relationship which veers the tone away from a raucous science fiction adventure and more toward a romantic comedy in space. That is not to say that Peter and Kitty’s misadventures in romance are not funny and entertaining because they are but that is an element that has been exhaustively examined in Legendary Star Lord, also written by Humphries. In my opinion the opening opus of a major, multiple title spanning crossover should be bombastic and mind blowing in both visual and story content. Here Humphries sort of stutter steps through the opening when he should have a very clear and concise objective; expound on the Black Vortex, give us history and explain why it is so important and powerful. He does give us a bit of that but just as quickly we are back to more rehashing very recent continuity. With Secret Wars just around the corner, the remaining stories being told in this Marvel Universe should be the most epic in scale and scope; that’s what I hope The Black Vortex becomes before this is all said and done because I love both of these teams so much and there is so much potential here to tell a great story but there needs to be focus. Star Lord and Shadowcat are not Ross and Rachael for God’s sake; give me less romance in favor of a compelling adversary and an engrossing plot based on overcoming a viable and sinister threat. The humorous elements are there, the witty banter, the sarcastic yet intelligent quips and they are all spot on, I would just like to see more substance and plot progression woven into the overall narrative. 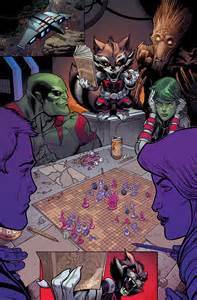 Visually this issue has some more substantial problems stemming mainly from Ed McGuiness sharing the penciling duties with Kris Anka. The resulting inconsistency is jarring to say the least, McGuiness does a fine job, and as usual his pages are slick, dynamic and exciting. In contrast Anka’s images look flat and somewhat restrained, not that the work is without merit it is just a bit too incongruous when viewed in this context. Another, perhaps even more distracting factor is the use of too many inkers which just adds to the overall inconsistent look of the entire work. There are some really good pages in this issue by both pencilers but unfortunately the presentation amplifies the inconsistencies.

This is the opening chapter and as far as that goes it did get me more interested in the story and the concept of the Black Vortex however not for all the right reasons. The lack of exposition and further explanation of The Black Vortex are ironically what have me anticipating the second chapter in hopes of having some of those questions answered. In the final analysis, I love the X-Men and Guardian so much that I will certainly be on board for the long haul and even with the few mis-steps I would still recommend this to fellow True Believers if for no other reason than to savor these last moments of the Marvel Universe as we know and love it, Excelsior. (3.75/5)

Shawn is an aspiring writer/ artist who has been reading, collecting and living comic books for over 30 years. He lives in Baltimore with his wife, their son, lots of cats, dogs and other various finned and furry friends