Being from a small town, the comics that mainly found my dollar were from the big 2. Once I got older and actually started going to comics shops, it was hard to turn away from those familiar titles and characters, to take a chance on a company that I didn’t recognize, whose books looked so different from what I grew up on.Valiant Comics has always been a character-based company, focusing on original ideas that have become the staples over the years. In doing so, they have built a universe in a fairly short amount of time. (The company was established in 1989.) That universe building has led to Imperium #1, which dropped this week.

Everything, as usual, revolves around Toyo Harada, wealthy psiot and leader of those same enhanced humans. He want psiots to take over, to rule the world in the way the governments have not, to bring about the utopia that he believes is a possibility. The government has different ideas.

The Harbinger Wars, fought between Harada and the government’s Project Rising Spirit, are a piece of history in this book. The fruits of the war have been realized, and we’re seeing one of the original psiots in extreme old age. The world has changed, but has man done the same?

Joshua Dysart (Swamp Thing, Unknown Soldier) has deep roots in the Valiant universe, having worked on both Harbinger and Bloodshot books for the company. He knows this stuff, and he puts that knowledge to use in penning a story that is post-script and prequel to so much of the universe. 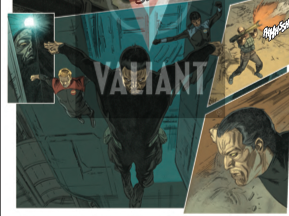 Doug Braithwaite (Green Arrow, Wolverine Origins) is another Valiant alum who continues the tradition of strong art in that company’s books. His realistic approach to the comic grounds the story, making it seem more possible than it would read without the astounding art. The lines are crisp; the colors by Brian Reber and Dave McCaig are toned perfectly for the page.

I guess that for me, the thing that is most impressive about this book, and all of the others that I’ve read from Valiant over the past year or so, is that they really are making connections between their characters and titles. You don’t see a lot of that interconnectedness outside of the big two, and it’s homage to the way things were done before while still doing it Valiant’s way. It seems like the company is in for the long haul, and they’re building their universe with a solid base for a long run.

Imperium #1 is a look at the future that Toyo Harada is pushing in the other Valiant titles, told in a flashback from the point of view of someone on the front lines, from the moment it begins. Joshua Dysart is integral to the foundation that Valiant is working on, and his talent shines through as he shows Toyo Harada for the visionary egomaniac he is. The artwork is “Valiant good”, a term that may come into popular parlance if that company continues to put out the high-quality stuff that Doug Braithwaite has put into Imperium #1.