The penultimate issue of The Wake opens with Leeward, now the first mate of the enigmatic Captain Mary’s crew, recording a “captain’s” log very similar to those of her numinous predecessor Lee Archer. Having convinced Mary that the radio signal from the 21st century may be the key to saving the world from the vicious race of Mer creatures, the ship and its crew set out to research the mysterious transmission from this point in the narrative on Snyder and Murphy begin to methodically chip away at any hope that may have been built up on this arduous trek.

Scott Snyder maintains a brisk pace while meticulously unfolding this epic tale. There is so much to take in that the sheer scope of the story threatens to overshadow the individual characters; however that is not a dilemma for Snyder as he deftly weaves in plenty of character developing details along the way. In fact that is one of the many strengths of this story, its colorfully diverse and fully actualized cast; there is Leeward, the plucky idealist, the peculiar Captain Mary who provides a dose of jocularity when things threaten to become oppressively heavy or bleak and then there is the ominous Governess sinisterly stalking the shadows, waiting for the moment to pounce. These are classic archetypes that Snyder has cleverly modified to work as conduits through which he tells this complex and deeply human story. This issue is full of subtext, intrigue and suspense; as we move into the concluding chapter the tone of the narrative seems to have grown darker than ever, circumstances have become increasingly precarious for our protagonists and hope is evermore fleeting. The final page of this issue leaves us to expect the worse but as always to hope for the best. Once again Snyder has given us a great comic book full of heart, action and tons of tried and true science fiction tropes reimagined and presented in an intelligent and well-constructed narrative. 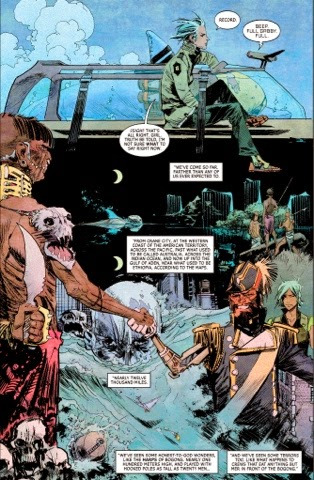 Sean Murphy is one of my absolute favorite artists and he is one heck of a nice guy. I had the very good fortune to meet him last year at Baltimore Comic Con. He is one of the most approachable and down to Earth creators I have ever met. Murphy has a very recognizable style; his kinetic line work is charged with emotional energy giving it a sense of utter urgency that works extremely well with the tonal quality of Snyder’s dark and moody narrative. The hyper- comprehensive aspect of Murphy’s style brings the world of The Wake to life in stunningly exhaustive detail. The sheer amount of which adds a degree of depth to his work that goes far beyond what one would consider backgrounds. His panels are singular works of art making Murphy certainly one of the most meticulous storytellers working in comic books today. Matt Hollingsworth’s muted and subdued palette is spot on perfect for this book as well. He adds a dream-like element to Murphy’s work that is particularly stunning in the underwater scenes. This is one of those creative teams that have chemistry and synergy that goes beyond the page; there is an esoteric element at work here, an unexplainable genius that speaks through the resulting work.

The Wake has been slow coming out but boy has every single issue been worth the wait, which is especially true about this issue. I am one of those comic book readers/collectors who are fiercely loyal to a creator, more so at times than to a title or even a character (except Batman) so when I see Scott Snyder’s name on a book I pick it up unreservedly. This practice has yet to fail me and it certainly paid off in this case. I recommend The Wake to anyone who enjoys beautifully written and illustrated comic books. I think that includes just about everyone. (5/5)