Fear and fascination with a hint of 50s flare. That is the best one sentence description that I could think of for the new Godzilla movie from Director, Gareth Edwards. If you are looking for a suspenseful, visually spectacular summer flick, look no further than the King of the Monsters. The great lizard king is once again the King of the Cinemas.

I have spent the last sixty years without watching a single advertisement or trailer just waiting in anticipation for this monster mash. I am not a Godzilla fan and I have never been drawn to the story at all. What drew me to this new rendition of Godzilla was Bryan Cranston (Joe Brody) and his phenomenal acting skills that recently earned him a Golden Globe for Breaking Bad. For those going into this movie with the same love for Cranston, I hate to be the bearer of bad news, but the trailers for this movie are incredibly misleading. His character is only alive in this one for the first thirty movies.

While Cranston has only a minor part, his character is the building block for the entire movie. My disappointment is the lack of Cranston was quickly overthrown once the 400 foot monster showed himself on the screen for the first time. I promise that you reaction will be the same. On that note, the only way to see Godzilla is in IMAX 3D. If you are looking to save a few dollars, then just do not waste your time of this movie. Godzilla is big and deserves the biggest and best when being featured on the big screen.

The plot of this movie is pretty mundane and fairly simple to follow. Godzilla has remained dormant since the 50s, but reappears when a nuclear plant in Japan show signs of other potential monster activity. This leads to the eventual meltdown of the nuclear facility and ends up costing the life of Brody’s wife. Her death sent him into a state of madness that leads him over the next fifteen years to uncover hidden secrets about what was really beneath the nuclear plant.

The findings would also cost him his life as mentioned earlier and the torch would pass on to Brody’s son, Ford (Aaron Taylor-Johnson). After his mother’s death, not much is given on the story of Ford other than the fact he is a lieutenant in the United States Navy.  For whatever reason, this also qualifies him to lead the charge against the monsters that took both of his parent’s lives. He is married and has a son that lives in San Francisco. This is important because that would be the final stage for the epic battle between Godzilla vs. MUTO (Massive Unidentified Terrestrial Organism) vs. Mankind. Just imagine. Your family is in the city where there is about to be a massive war between monsters. Sorry, for not talking more about Ford and his part in this movie, but I just found it useless and boring. My real interest was only Godzilla.

Fast forward to the last thirty minutes of this film and you will witness one of the greatest IMAX spectacles that is existence today. Almost every movie that I see is in IMAX 3D, but I have never seen anything like the last thirty minutes of Godzilla. There are points in the battle sequence of the movie that my heart beat was literally rushing as if I was running from the monster myself. It is everything that you would expect from a final monster showdown. Godzilla takes on two MUTOs that are wreaking havoc across the San Francisco Bay area. Buildings crashing to the ground and impressive details to the monsters were only the minor things that were awesome. What was paramount was when Godzilla grabbed one of the MUTOs, pulled its jaws openings, and filled his body full of blue fire! Personally, this was the greatest moment so far for me of the 2014 IMAX movie season. One other part that deserves noting is the roar of Godzilla was terrifyingly brilliant and the sound editing department for this film was right not spot with their rendition of this great roar.

Not really having anything to compare this movie to from previous Godzilla flicks, the reaction of the crowd during certain sequences clued me into the understanding that this movie did contain all the necessary Godzilla lore. What really is there that you need? Big monsters fighting one another and a city that is being terrorized. Maybe I am more of a Godzilla nerd than I thought.

My expectations of this movie were solely to be entertained. I was not looking for there to be a superb plot or any gut-wrenching drama sequences. I was expecting it to be two hours of monster mash. Unfortunately, the movie takes quite some time to even get a glimpse of Godzilla. I just wanted to see him smash the planet to pieces, but the director decided to ignore my meaningless emails over the past few months of filming.

Overall, Godzilla rocked the big screen because it was a massive budget film with a big lizard king. I am excited about any other Godzilla movies that Warner Brothers plans to create and I will happily throw my money at the box office to see this one again! On behalf of the Bag and Bored team, we give this one a BAG IT! 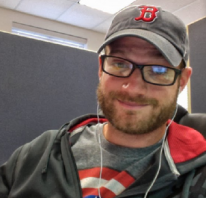