We want our favorite comics to go as long as possible. The Walking Dead just released its 123 issue. Spider-Man went to 700 before the reboot. The Curse…well…The Curse is only going to be four issues.

I know right? How could something this cool only go four issues? The answer is simple. Michael Moreci (Hoaxhunters) and Tim Daniel (Enormous) only need four.

Not that I can’t see a future for expansion within this universe. I can totally see that, but for the story on hand, number three of a four-issue run was released this week, and be prepared to be left hanging!

Issue two ended with the fantastic image of Anton, the werewolf, chained in Laney’s basement amidst a floor littered with bear traps. Three takes up at that point or shortly afterwards, with Laney questioning Anton on the nature of his “disease”. He’s not killing Anton, so the reward for the killer’s capture is not foremost in Laney’s mind…perhaps he’s looking to use Anton, or his blood, in some way to save his son? Those who know aren’t saying, but it seems like a reasonable direction for the character.

I love the way this is staged, the tension building as the calendar days are checked off. Moreci and Daniel have paced this so that as we are building to Anton’s next change the events in the story are also coming to a head. We’re at a crucial point in the story. Jaren, Laney’s son, is at death’s door, in the hospital and dying of leukemia. Lester Phillips, the convicted murderer of Laney’s wife, knows about the wolf in the basement and is planning on blackmailing Laney. Nora, Laney’s sister-in-law, is all but certain that Laney himself was responsible for her sister’s death, and is ready to take him in. And don’t forget Anton, who with each passing day gets closer to “wolfing out”.

Mr. Rossmo…I love this cover! It’s a fantastic image of the man in chains and the wolf within. Riley Rossmo (Daken: Dark Wolverine) and Colin Lorimer (Harvest, DHP #10) have drawn with perfect tone for this book. There is a sketchy quality, extra dark lines that seem to have no purpose but help to “grit” up the pages and show movement where there is none, that makes this book awesome to look at. The art helps to visualize the schizophrenic nature of the main characters, mainly Anton and Laney. Anton, obviously fighting with his wolf nature, and Laney, doing what he knows is morally wrong in the face of losing his child. Who is the wolf and who is the man?

If you aren’t reading The Curse…get out there and do it. You only have one issue left, and then it will be gone forever, never to return…oh…who am I kidding? This is so good that it’ll be out in trade soon enough, and as I mentioned before I can see a future for spin-offs in this universe. But The Curse is so good, and you faithful comic readers so ready to read good comics, that you really should be on the ground floor of this. Moreci and Daniel are at the top of their game, and with the added talent of Lorimer and Rossmo…well, they are bound to be a howling success. 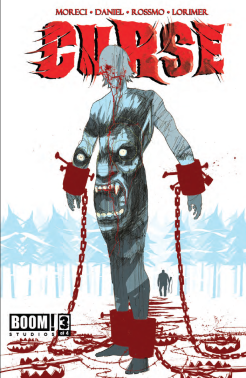