Rick Remender’s engrossing tale of Grant McKay and his group of stranded Dimensionauts takes a dark turn in this issue. So far the wayward band of dimension hopping anarchists have seemed to be a fairly close knit unit however, that all changes with the events of issue #4. There is treachery afoot as a brutal betrayal leaves one of the key players for dead and that’s not the only thing brutal about the narrative at this point. The story begins with Kadir, Ward and company being relentlessly pursued by a war party of futuristic tribesmen astride armored horses. Kadir and the other Dimensionauts are running for their lives while Grant has ended up in a much calmer and far more comfortable destination, in fact it seems to be some sort of hotel or resort. We learn a bit more about the Pillar and the research and development that went into its creation, perhaps even more importantly we learn who was involved in its creation. Remender keeps the story intriguing by raising more questions than he answers while revealing more of what makes these characters tick and letting us know up front that not everyone is what they seem. 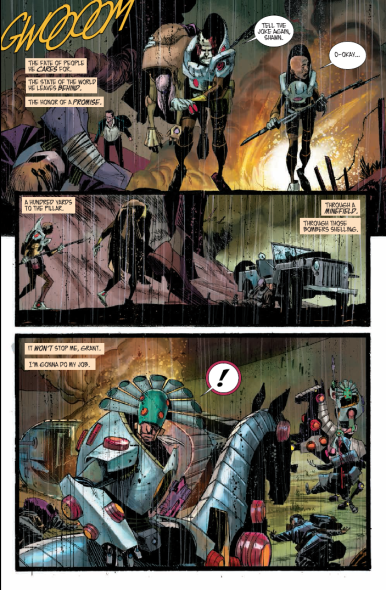 This is such a fast paced issue that there is scarcely time to take a breath between panels. Remender keeps the action rapid and the suspense taut thereby really ramping up the sense of urgency in this issue. He does some fantastic character work here as well, delving into some of the deeper and darker recesses of the personalities, particularly into Kadir. The entire cast is so varied and diverse that Remender really gets to display his talent for writing captivating characterizations and smart dialog. We get to see these multi-faceted characters from vastly different angles as circumstances change quickly and drastically. Remender hasn’t given us a textbook hero or villain in this story instead he has written characters with flaws and attributes, these are more genuine and realistic than black and white/ good and evil roles could allow.

The narrative is moving through a decidedly darker region of the story and appropriately not everyone is going to make it through unscathed and certainly not unchanged by the events. The moral ambiguity of Grant McKay seems to make him weather the tumultuous occurrences better than his colleagues for the most part however he still has a sense of the heroic about him, maybe not in an altruistic sense but certainly in a subjective sense. He is equal parts Han Solo and Reed Richards, a man who at times can be his own worst enemy, his broken moral compass allowing him to make the tough decisions that “better” men dread. In Grant McKay, Remender has given us a heroic scoundrel, an adulterous family man and an indisputably relatable protagonist that we can all root for because in the end he is undeniably likable. 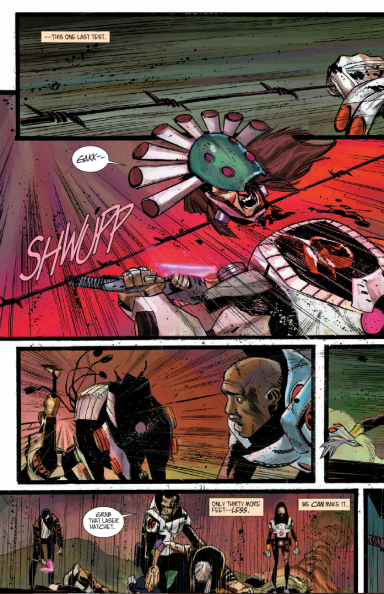 Matteo Scalera turns the action up a notch in this issue. His images explode from the page, spilling from panel to panel in a kinetic eruption of sequential art brilliance. Scalera has been perfect since the first issue of this series, his character designs and stylized interpretation of anatomy are a flawless fit for Remender’s pulp inspired narrative. The relentless pace of this issue is matched by Scalera’s energetic approach to storytelling, giving the entire work a break-neck tempo that almost burns through the pages. This book is alive and bristling with vitality. Dean White adds a dimension of otherworldliness to Black Science that could only come through his vivacious color palette. His vivacious and brilliant use of color transport us into Remender and Scalera’s collaborative world in such a viable and genuine way that you can almost feel the atmospheric electricity. This book is a work of art in the truest sense of the term, from concept to execution; Black Science is comic book excellence. Issue #4 is alive with all the things we love about this medium, if you are not reading this book, you are most certainly missing out on something singular and special, beyond my highest recommendations. (5/5)