All right. Let’s take a minute to address the rumors—no spoilers. If you know what I’m referring to, great. If not, skip to the next paragraph. I listen to a lot of Spider-Man podcasts and read a lot of Spider-Man news, and I’ll admit, it has kind of ruined the comic for me. When you hear enough speculation, some of it is bound to be right, and if you follow the resulting lines of reasoning, it’s difficult to remain surprised. Because Spider-Man is such a personal character to me (my first two action figures were the Toybiz Spider-Man and Venom), it’s hard for me to stay away from the fan communities. But it’s seriously putting a damper on the comic itself and my ability to review it without my opinions being colored by others’ negativity. So until the end of this series (or this volume of the series) I vow to stay away from Spider-Man news. With that said, let’s talk about The Superior Spider-Man #25.

The first thing you may notice about this book is that it’s double-sized with a $4.99 price point to match. Clocking in at 33 pages, this issue sees the conclusion of the “Darkest Hours” storyline as the Avengers confront Spider-Ock’s one-man war on crime. From a narrative standpoint, the issue mostly serves as transition while Slott and Gage move us out of one arc and into the next. And honestly, I found the setup for the next storyline—Goblin Nation—to be more engaging than the all-out brawl between the Avengers and the Venom-possessed Spider-Ock. I know. What’s wrong with me? 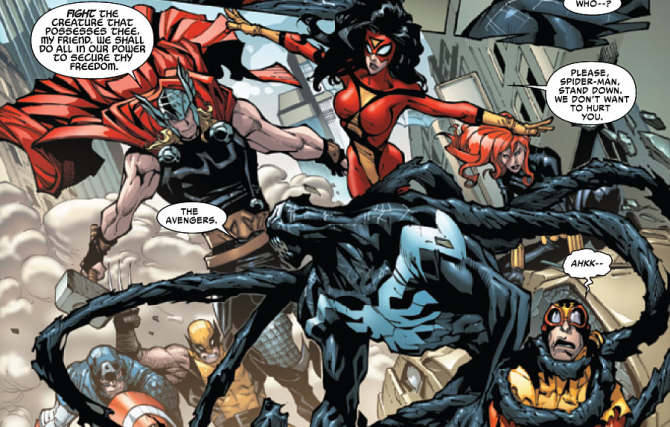 Dan Slott really hasn’t done his definitive goblin story yet, and it feels as if he’s inverting another Spider-Man trope as a means of deconstructing the character, which is admittedly what this entire series has been about. While one of Peter’s greatest strengths is his support system from the likes of Mary Jane, Daredevil, Black Cat, Aunt May, and as of late, the Avengers, Spider-Ock has alienated almost every one of those supports. At the same time, the Green Goblin has been building his own twisted support system by gathering up goblins, creating his own family and adding another ironic contradiction to the “Superior” in the book’s title.

Additionally, spinning out of this inversion is the introduction of the newest character (kind of), Monster, who looks a little too much like a palette swap of the Green Goblin. But maybe we’ve gotten to a point where we either don’t necessarily need much variation among the goblins. If that’s the point, I can see what they’re going for. On the other hand, perhaps it’s difficult to keep a character within that scheme while making him or her visually distinct. While we’re on the topic of art in the issue, say what you will about Ramos’s exaggerated style of expression, but the man knows how to tell a story. Each page flows clearly thanks to good composition and of course, the inimitable Chis Eliopoulos’s lettering (I cannot stress enough how important good balloon placement is). I still hold that Ramos is at his best when characters have to interact through conversation, and we do get plenty of that in this issue as well. 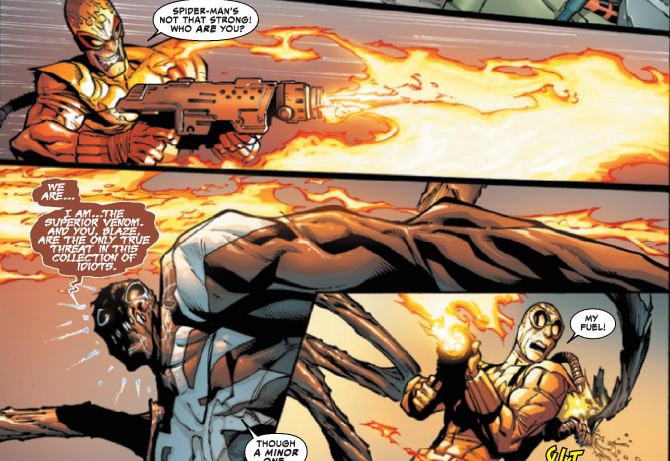 At this point, I’m sort of grasping at straws. There’s no shortage of plot progression in this issue, and I’m hesitant to post many scans, simply because any of them could be a potential spoiler. On the other hand, I didn’t think it was a bad issue. Superior Spider-Man #25 is just another piece of the larger picture, and it’s what I’ve come to expect from this creative team. Perhaps the problem here isn’t so much the issue itself as it is the fact that it’s part of a larger story, one that would be easier to evaluate on its own terms rather than in installments.

So if I had to sit back and grade “Darkest Hours,” I’d just say that it sets all of the pieces in motion for “Goblin Nation,” with the players being pushed as closely as they can to the series finale. I didn’t really dig the Venom side of the story, as it has the “illusion of change” vibe to it and can be summed up as “Spider-Man gets possessed by the costume again, and the Avengers fight him to remove it.” That’s basically it. All of the subplots are really the draw to “Darkest Hours,” and I can’t wait to see this series come crashing to its conclusion.