Story One: “Dreaming He Is a Butterfly”
WRITTEN BY:  Christos Gage
ARTWORK BY:  Jheremy Raapack
COLOR ARTWORK BY:  Carrie Strachan 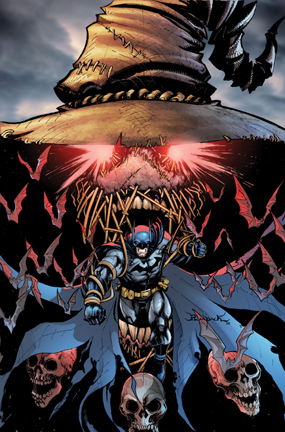 “Legends of the Dark Knight” is such a great idea - different creators from all across the comicsverse doing short Batman stories, released as a Digital First then printed in single issue collections.  Though the trend with these aims more towards a complete storyline, releasing chapters of a tale as opposed to a short comic every week, these first batches were mostly single stories.  This collection - #9 in the series - is of the multiple story variety, with two being printed in this issue.

One of the main problems I’ve had with this title, and this was covered in a review I did earlier of issue #6, is that the stories are usually hit or miss.  This issue, much like the one reviewed earlier, is mostly a ‘miss’ and for nearly the same reasons - the writing and originality of the stories.

The first story we have here is “Dreaming He Is a Butterfly”, which has some great artwork from Jheremy Raapack who, among other things, has been a major part of another of DC’s Digital Firsts - “Injustice”.  His work is weird, chunky, and very unique, and I feel he does a pretty good job of covering a lot of area, especially in “Injustice”, with so many characters in and out of the chapters.  He just gets a good hold on a character’s look and sticks with it throughout.  His Batman is the Bats we know and love, with a few hints of maybe some Kelley Jones or Sam Kieth in his lines and details.  Still, very much his own work, and it works.  The Scarecrow design leaves a bit to be desired, but other than that it’s a solid tale - but only visually.

Here we go with the writing again.  Christos Gage has brought us a story that is sadly very ‘played out’ in all forms of media including comics, television shows both classic and ‘modern’, etc.The tale revolves around Scarecrow having created another new version of his fear gas, but altered to not only be absorbed through the skin (something Batman is not prepared for in this) but also to cause a slightly different effect on the victim.  With some quick explanation, we learn the new gas is more oriented around the “the real enemy”, namely ourselves.  Combining your fears and dreams into a maelstrom of madness, this new gas takes Batman on a trip into his own head and into a false reality.  In this ‘alternate universe’ shown to Bruce by Scarecrow’s puffs of green craziness, Batman is no more, Bruce is beaten and busted up, and he is now bound to a wheelchair.  He has bouts of dementia where he believes he is still Batman fighting his war on the streets of Gotham, only to be awoken from this to what is now his ‘reality’.  Though this new form of fear gas is highly potent and fully realizes an entire ‘universe’ in a way much stronger than any we’ve seen before, Bruce starts to notice problems with this ‘new life’.  Add in an Alfred that seems to hate Bruce for wasting the life and money he had on such a frivolous pursuit, and the ground is placed for the rest of the story.  Sadly, from here the bulk of this story is filled with running over that same idea again and again with Alfred, and eventually Gordon, who both continue to tell Bruce that this is reality, and the life he had as Batman is no longer, now just an hallucination keeping him from fully living the life he has left.  Bruce eventually finds a way to see through the false life, and pops back in time to take Scarecrow out in the usual fashion.

Now, this whole thing might ring a few bells with some of you out there, and well it should.  This story has been told so many times over, from ‘the Twilight Zone’, random films throughout the years (like “Gothika”, for instance), and even an episode of ‘Buffy the Vampire Slayer.  There’s more examples, I’m sure, but that gives you a good range as to what I’m talking about.  The whole set-up is as much in those as it is in this story.  The fake reality forced on the main character.  The false reality attempting to convince said character that it is the only one, that the other is strictly fantasy.  And, finally, the false reality broken through in some way by the smarter lead.  I really don’t see why we need another telling of this same story with different characters, and the writing of what is here is not exactly a winner, either.  The dialogue seems forced, overly dramatic, and really doesn’t sell the story on it’s own merits.  It’s just Batman and crew molded into this tired device, and is not really handled all that well.  Disappointing, for sure.

The second story is much shorter, and is a quick Bats and Catwoman tale - written by the usually awesome Ray Fawkes - that reads more like an idea than a fully scripted comic.  Without going into the story (well, there really isn’t one, honestly), it’s a clunky bit of writing, and there never really seems to be anything important going on.  What serves as the story here is not much more than a situation, without much lead in and even less of a closing.  Again, like the opening story, I really can’t see why this was published.  This may come off as unreasonably harsh, but there is no other reason to read this story but one: the amazing artwork by Stephane Roux.  The art has an amazing look to it, and is smooth and almost noir-ish in presentation.  This Batman resembles the Michael Keaton version from the Burton films, with a bit of the more classic Batman, and I think it really looks great.  Giving it an almost painted look, with heavy shadows and thick lines, this is some quality work all the way through.  The color art creates an almost animated yet realistic style that really livens up the page and brings some awesome colors to what starts out as a very dark theme in the art.  It’s just lovely work that makes me wish there was some actual meat to this short comic.

And that’s the theme with these, it seems.  Almost every one of these I read has at least one story that is totally botched and it makes me a bit unhappy as a huge Batman nut.  The original “Legends…” print title from a while back had much stronger stories and issues, and DC really seemed to care more for that version of the title than this one.  In a way - and even with some great creators like Ray Fawkes - this feels like a garbage dump of old or new talent, needing work to keep them in the job or to get them farther up.  While there have been many of these chapters I have enjoyed, they’ve mostly been from the first batch or the most recent chunk.  This issue?  Even with the solid artwork for both stories I say avoid this issue.  And this is coming from someone who has been unbelievable obsessed with Batman comics for nearly 30 years.  I take this character and is world to heart, and when he’s handled badly, it really stands out.

I would really like to see more originality in these chapters, and have been very let down by this title as a whole.  For the sake of my love of Bats and the awesome artwork on display, I’m going to give “Legends of the Dark Knight” #9 a score of 2.5 out of 5.  It’s just not hitting the mark.  Actually, it’s not even that close to the target.