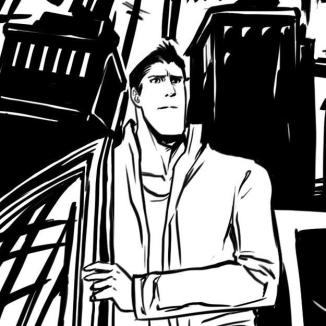 “Peace Sign” is an upcoming comic from creators Tom S. Johnson and Jane Shepard, and focuses on a team made up of LGBT Superheroes.  I feel this project is not only a much needed shake of the comic book world status quo, but also something that can and will inspire many LGBT creators and fans alike.  Co-creator Tom S. Johnson was able to answer some questions for us at Bag & Bored.

- Can you tell us a bit about yourself?

When I’m not writing, I enjoy hiking, bikeriding and practicing yoga.  I’m also a vegetarian, and I’ve recently become interested in gardening.

- You started a comic company as a child with a close friend.  What did that experience teach you, as far as the creation of comics go?  Did you ever get anything published?  Out of the paths you could have taken, how did you find yourself eventually creating comics again?

That was quite a long time ago.  He and I did everything by hand with pencils; I don’t even think we used a copying machine.  I was pretty entrepreneurial at that time, and we sold the comic books at school.  I think it taught me how to tell stories with a specific market in mind, and I guess it worked because I think we sold out.  It also taught me that trying to reproduce comic books with only a pencil isn’t the best idea.  I’ve been a lifelong comic book and superhero fan, and a few years ago I had this idea for a series about LGBTs who discover that they have superpowers.

- ‘Peace Sign’ not only looks to be an awesome upcoming comic, but is also a rare find - an LGBT Superhero Team.  The premise is brilliant, and greatly needed in the comic book ‘business’, which - with a few exceptions here and there are still a bit ‘behind’ on LGBT issues.  What would you like to see different in mainstream comics?  Any comic titles you’d like to see changes in, or ones you think are heading in a positive direction?  Recent things come to mind, like Alan Scott/Green Lantern in DC’s ‘Earth 2′, and the wedding of Northstar and his boyfriend Kyle in ‘Astonishing X-Men’?  I remember Northstar’s coming out in the early 90’s very inspiring for me at the time.

First of all, thank you for the compliments.  I think it’s fantastic that you found Northstar so inspiring.  I have to say I was disappointed that it was deemed necessary to remove Obsidian from the DC universe in order to revamp Alan Scott’s character, as I’ve been of fan of Obsidian since his first appearance, but it sounds like that factored into the decision to have the first openly gay Green Lantern.  So maybe it’s all for the greater gay good.

- On the comic’s website, you mention some awesome characters such as Batman, Wonder Woman, Spider-Man and Cyborg, among others.  How did the diversity present in some comics of the time speak to you, and how much of this led yourself to co-creating ‘Peace Sign’ with Jane Shepard?

I was watching Super Friends when it originally aired and they added more diverse characters, and I’ve always been a fan of the Global Guardians.  One of my favorite eras of the Justice League was when it was called Justice League International and there was the Justice League Europe spinoff.  And then there was New Guardians, which was groundbreaking in a lot of ways, especially Extrano’s journey.  Today, in addition to even more ethnic diversity, I would like to see more variations of and more realistic gays and lesbians, i.e. characters with the issues we experience in real life, and most definitely more transgender characters in comic books and in the media in general.

- While creating the comic, its characters, and the overall ‘universe’ it would exist in, how did you and co-creator Jane Shepard collaborate?  When did you finally feel you two had such a hold on the ideas that you knew this was going to be something special?

Jane and I collaborated in a such a wide variety of capacities in the theatre in NYC that it wasn’t a difficult transition into collaborating in a different medium.  Jane has had success in comic strips, painting, television, film and music composition.  I was and continue to be flattered that she agreed to co-create Peace Sign with me.

I want to start by giving props to Sarah Menzel.  I agree that her work on the first issue is brilliant.  From my perspective, there was absolutely no conscious or purposeful intention of being similar in style to DC Animation.  However, anyone who’s shared a dwelling with me can attest to the fact that I am quite a fan of DC Animation, especially Justice League Unlimited.  I guess you can’t watch anything that much and it not get into your subconscious fairly significantly.  What I was consciously going for was a traditional contemporary superhero comic book style with an LGBT sensibility.  I also wanted a layer of noir specific to the first issue, and Sarah Menzel depicted all of these elements exceptionally well.

- Can you tell us a bit about the main characters, their motivation, and maybe how they work together, both relationship and team-wise?  What is the reason this team is originally formed, and how will this shape the arc of the book?

- The synopsis you have for the first issue makes me even more interested.  In this you mention the character Tory, and his work and relationship troubles.  Can you give us some details on these?

Tory’s relationship and career are only referred to in the first issue in order to streamline the story.  These elements will be increasingly focused on as the series progresses, which will include some compelling and unique supporting characters.

- It looks like you have a number of future storylines worked out already, which makes me curious - how long have you been in the planning stages?  Can you tell us (spoiler free, of course!) a tiny bit about what we might be in store for down the line?

The plan is for all of the principal characters to be gradually introduced in the first three issues.  The second issue focuses on Leo, Jimmy and Sergio, and the third issue focuses on Cameron and Vita.  In the fourth issue, Eli and Mira will explain the full truth about who they are and how they’re connected.

- Some of the main themes I read in your writings about yourself and your work seem to be mostly themes of diversity, equality, and an awesome view of how the world (in comics and elsewhere) could rise to the occasion themselves with the model of your title.  How do you think major comic publishers would react to such an idea, if it were proposed to them as a series?  (Good and/or bad, and no need to mention specific companies).

Thank you again for complimenting both the series and me personally.  I honestly don’t know how major comic book companies would react to Peace Sign.  I think it’s amazing that they’ve embraced gay and lesbian characters in a way that wasn’t possible in the era of the Comics Code Authority, and I hope that will continue to grow and that Peace Sign will contribute to that expansion.  One of the coolest examples I can think of is that Batwoman was originally created so people wouldn’t think Batman’s gay, and now she’s an out lesbian.  That’s the kind of spinning that I hope will continue.

- Any future plans for another title, or any other creative works?  I see you’ve written plays in the past.  Any future plays down the line?

I’ve been pretty focused on Peace Sign and its entrance into the comic book industry, but I do have ideas for Peace Sign spinoff series.  I was fortunate to have some of my plays produced in NYC, but I have no intention for any of them to be produced again.